Review of Original Soundtrack Album by Once 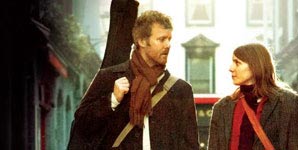 John Carney's low-budget tale of an Irish busker (The Frames' Glen Hansard) and a young Czech mother (Markéta Irglová) has been gaining astounding reviews from the cinema press for the realism of the aching sentiment felt between the two lead characters. With any consummation of their love out of the question (Irglová's character is devoutly married), the outlet for their feelings is portrayed through the songs they perform, weaving through the film so naturally that the viewer is almost unaware that they're actually watching a musical. Unsurprisingly the film's soundtrack is an acoustic strum-heavy affair, with Hansard and Irglová having written the majority of the tracks contained within. Taken away from the context of the film however these songs lose a great deal of their emotional resonance, only fitfully rising above the bland. 'Falling Slowly' does well to get things off to a melodically maudlin start, while the quirkily bouncy 'Fallen From The Sky', which would sit perfectly on the first Ben and Jason album, is a welcome lighter touch. In contrast however the improvised 50 seconds of 'Broken Hearted Hoover Fixer Sucker Guy' fall just the wrong side of smug whimsy, and all too often Hansard drops a solid tune in favour of melodramatic wailing towards the end of a track adding a desperate weight when understatement would possibly serve better; his voice soon grates as a result. Nonetheless there are some appropriately wistful moments scattered all too sporadically throughout the disc; Irglová's haunting, gothic delivery on album highlight 'If You Want Me' is genuinely affecting, and the tracks would probably benefit from a greater presence from the young singer. The album will find many fans with those touched by the film where a reliance on standard busker fare is essential for the feel of the picture, but it is hard to shake of the ersatz nature of the emotions expressed; for authentic acoustic melancholy it's better to look elsewhere.