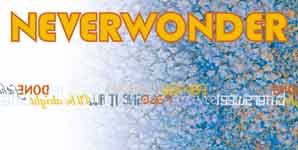 Southern California-based hard rockers Neverwonder debut with a 10-song collection of melodic, hard-edged, and clever tunes. The complexity of tempo and style changes is juxtaposed with lead singer Joy Pearson's throaty vocals. Person's voice sounds like a cross between Pat Benatar and Janis Joplin, with the intensity of ten Gwen Stafani's. Little fluff, but tons of appeal and allure with her wide-range and catchy melodies. The Ramos brothers flex their rhythmic muscle as drums and bass lock in on the aforementioned breakdowns and switches making a seamless groove that is the band's foundation. Flint Mavis' full-bodied chord passages and screeching hot leads serve to raise the already high level of intensity. "Father's Children" incorporates the aforementioned elements adding thoughtful, intelligent lyrics with references to faith. The surging tempo accentuates the deep emotional roots of the tune, while "Turn Around" and "Save Me" explore the band's offer softer tendencies.