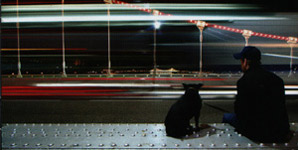 Holy crap, I've been wondering what happened to these guys. I remember back to the turn of the century when me and my partner in crime were digging hungrily through an avalanche of miscellaneous second hand CDs in a Glasgow record store. The risky pick of the day was an album called '1000 dreams' from a band named after a dental hygiene product. This was a pure case of judging a CD by its cover and it turned out to be the best random find I've ever known...good work Jonny!

Their underground, ragga infused punk rock melodies, strong lyrics and dub style drawl were destined to be blended together like mint, lime and rum to make a perfect mohito of sound. Although still relatively unheard of, their unique style and charisma caught the attention and gained the respect of the infamous Tim Armstrong back in the days when he was still kicking the shit out of the punk scene as part of Rancid. After Mouthwash supported Rancid on tour, Armstrong offered them a record deal with Hellcat records, subsequently spawning '1000 dreams'.True story.

Their new stuff is a bit more commercial, but it's still got the goods. 'The Sound' is special; definitely one of my favourite tracks. The whole album contains a level of ball tingling goodness similar to that felt by a testicular elephantitis sufferer.

'Mouthwash' are definitely worth giving a swill around.