Review of Coda Album by MIT 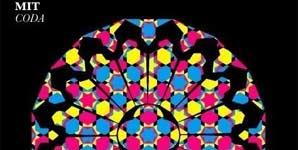 MIT seem to be German teenagers armed with machines and a delighted glee in being given access to a recording studio. This is a good thing: if they were British, they'd have all rushed out and bought Telecasters with the wages from their Saturday jobs and become a tuppenny-ha'penny âindieâ band, and God knows there's enough of them already. It's always been my perception that British music fans are far more sniffy about electronic music than our Continental counterparts. Sad to say I can remember the first wave of synth bands, and all the âit's not proper musicâ sneering that went on, with the attendant digs at fashion sense. Nothing quite as funny as a Judas Priest fan in the early 1980s deriding synth bands for being âpuffsâ and having shit clothes. Anyway, I digress. To the music!

âBeispielâ begins quietly, almost plaintively, before dark rumblings give way to a pulsing motor-disco beat that gradually intensifies before developing a harsh snare sound and pounding, tribal toms. It's three a.m. on the Autobahn and there's nothing else on the road. Raw, confrontational vocals yell out simple, youthful melodies for the last minute or so. Not a bad start at all. âZweiâ is more immediate and a bit more pop, the vocals less agressive and more melodic. There's still a stripped-down simplicity to it, and not a guitar in earshot. âParkâ is a mutation of eighties Sheffield electro and four-to-the-floor nineties dance music, with vocals that punctuate rather than drive. Again, the melodies are simple. âGibt es denn keine andere Gruendeâ borrows a trick or two from the ambient handbook, with a glitchy beat that reminds these ears of FSOL and those old âFeed Your Headâ compilations. The beat develops into a more aggressive, snare-driven beast, and odd wailings and slivers of slogans puncture the atmosphere. There's a a brief dropdown of filter-tweaking and fader-sliding before the beat reasserts itself, with more wailing vocals and odd shouts.

âGebautâ begins with some low-down farting synths, to which some airy notes are added, along with a beat that's almost junglist in pace. There's proper vocals on this one, again with a simple melody, and even I with my rusty and rudimentary German can pick out the odd line. Then there's more aggressive chanting, and I kind of lose the drift a bit, but by this time there's all manner of odd noises to keep me interested. âGenau an diesen Abendâ slows the tempo down to hypno-speed. The synths buzz and arpeggiate to good effect, the latter getting disorientingly distorted before stopping abruptly. âKleurâ brings the tempo up again, and there's a very harsh Laibach-esque tom-type sound that vibrates the eyeballs very effectively. The vocals are strident, repetitive, and later on there's a nod to something that might be called a tune. DAF might be a reference point.

âMerzâ begins with a beat that sounds like it's been programmed with a Boss DR-220 (how I used to love mine), and something that sounds like it might be a very delayed guitar playing one note (but probably isn't). The synths drone a simple two-note figure in the background, before a genuinely fucked guitar heralds some fucked-up vocals. This is proper shouting now, sampled up and distorted as the beat gets a bit Von Sudenfed and an arpeggio kicks off. From seemingly inauspicious beginnings, this might be the best track yet. âRauchâ has all sorts of electrobleep nonsense going on in the background, set against a one-note pulse that metamorphoses into the bastard son of âFade to Greyâ by Visage, but with shouting in German over the top. Synths fart and squelch like a pensioner with a bowel disorder, and another motorik beat kicks in. Great stuff. âCodaâ begins with a low-down glitchy pulse and an arpeggiated synth that acquires a succubus with evil intentions. It builds and intensifies, and I'm just waiting for the beat to kick in before I can bounce up and down with a grin on my face. Sadly, this moment never comes. A hi-hat keeps time, but it never kicks in. A trick missed, perhaps, but then again, what should I expect from a coda?

It's good fun is this. Yes, purists from various camps might point out its lack of guitars (yawn), the IDM-lite nature of some of the songs and the almost total lack of certifiable âtunesâ, but I like it. There's a lot of youthful energy in here, and also a lot of history. To go back to the suggestion that if MIT were British they'd have bought Telecasters, I hear very little in British âindieâ guitar music that doesn't come from the very recent past: MIT have, on this evidence, brought together a lot of electronic music from a lot of different places. They've done their homework and produced an album that nods at various things but isn't quite like anything I've heard. And to think they're just teenagers as well. Very good indeed, and perhaps even better to come. Endorsed.