Minks - By The Hedge Album Review

Review of By The Hedge Album by Minks

The classic British sound of early 1980s independent guitar pop is alive and well in New York it seems. Captured Tracks along with fellow Brooklynites Slumberland Records have built (and occasionally shared) rosters in debt to such halcyon times, having issued pivotal releases by the likes of Crystal Stilts, Dum Dum Girls, Wild Nothing and Beach Fossils between them. Boston's Minks operate from a similar school of thought, their sound developed through a fixation of bands like The Cure and The Smiths along with the more underground likes of Felt, The June Brides and The Jesus And Mary Chain. 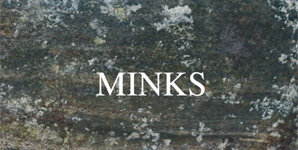 However, before anyone rushes out the house to buy a tin of black boot polish and a second-hand overcoat, let's examine their ethos more closely. Initially (and from a songwriting perspective, still very much) a solo outlet for the musings and deliberations of one Sean Kilfoyle, Minks operate in a similar way to Jack Tatum's Wild Nothing or Dustin Payseur with Beach Fossils in that while primarily Kilfoyle's baby, there's more than enough going on throughout each and every one of these compositions to suggest a fully formative band is at work here.

In some ways they are. Minks live shows have incorporated anywhere between one and six musicians in the past, and on 'By The Hedge', their debut long player, it's the harmonic vocal interplay between Kilfoyle and chanteuse Amalie Bruun that raises them out of the homage parapet for plagiarists into a seismic world all of their own.

Take opener 'Kusmi' for example, where the ghosts of 'Strawberry Wine' era My Bloody Valentine are laid to rest in elegant fashion, or the eerie countrified affair that is 'Out Of Tune', Bruun's petrified wail creating a virtual image of insanity and fear in the process. Elsewhere, previous single 'Funeral Song', re-recorded here parties like Robert Smith in 1979, Kilfoyle's ode to the passing of summer ("So long, the summertime") bright and breezy rather than a mournful wake. 'Cemetery Rain' and its introverted sound collage takes The Lightning Seeds 'Pure' for a walk in the Massachusetts autumn while the jangling 'Bruises' fuses a Spector-esque drum sound with more Shields/Butcher style harmonies suggesting Minks aren't quite ready to be pigeonholed in the same bracket as Morrissey et al just yet.

As an introduction to the works of Sean Kilfoyle and Minks, 'By The Hedge' is an exemplary, near faultless collection, and even though the vocals are mostly indecipherably low in the mix, there's a willingness to cross-pollinate several genres yet retain an identity of its own that makes this record stand out from a slowly becoming saturated crowd.