Review of Lifejackets Album by Mimas

There are geeky lyrics, there are very geeky lyrics, and then there are the lyrics to 'Application', Lifejackets' opening track. 'Sock-puppetry may be rampart online', begins Mimas vocalist Sn'var Albertsson, bemoaning the number of messageboard users and bloggers who sneakily respond to their own messages using different pseudonyms. As exciting opening lines to rock and roll songs go, this falls some way short of 'I am an anti-christ/I am an anarchist'. Remember when rock music used to be a visceral experience? Albertsson doesn't. 'Application' finishes with some nonsense about political blogs. The next track, 'La Moustache', addresses the possibility of getting food crumbs stuck in a moustache. These nuggets of wisdom are delivered in an attention-seeking yelp which is stranded far too high in the mix. In fact it's a testimony to the Danish trio's talent that, despite all this, Lifejackets is an enjoyable album. If you can get past the irritating lyrics, there's a lot to admire. 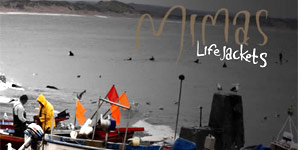 Getting past the lyrics can be difficult. At times, it seems like the band are deliberately sabotaging their own songs. Lifejackets closes with 'Relationships', a slow-burning ballad propelled along by a beautiful piano line. Albertsson's lyric is a overly precious attempt at the clich'd failing relationship/sinking ship metaphor. The song concludes with him repeating the lines "we all know people should use life jackets on water/like weak swimmers and bad swimmers and the navy coast guard", which is either an incoherent metaphor or some helpful but misplaced public safety advice. Appropriately, the lyrics come close to scuttling the track.

The album is at its best when he shuts up. At those moments, the spotlight falls on the band's clever guitar work. Albertsson and bandmate Daniel Beck are both excellent guitarists, casually throwing out lovely melodies. They claim that American Football are an influence, which makes a lot of sense, but their spidery, intricate style also recalls another Cap'n Jazz offshoot, Owls. While Albertsson and Beck grab the spotlight, the band's jazzy rhythm section augment the songs with some fleet-footed playing, subtly showing off their impressive musicianship. There are nice rhythmic touches throughout, from the excitable hand-claps at the start of 'Application' to the gently loping bassline of stand-out track 'Vader'.

Mimas are great musicians and talented songwriters. How much you get out of Lifejackets will depend on your ability to overlook lyrics which are painful when they're meant to be funny, and precious when they're meant to be clever. It's a flawed album, but a good one, and anyone who's searching for some sunny indie-rock to brighten up their autumn could do a lot worse.