Review of Don't Weigh Down the Light Album by Meg Baird

Meg Baird has certainly paid her dues, having been lead singer of Philadelphian octet Espers, an alumni of both Sharon Van Etten and the achingly hip Kurt Vile and releasing three solo albums, of which 'Don't Weigh Down The Light' is the most recent. Sometimes tarred with the post modernist brush, Espers have been considerably more versatile than mere copyists in thrall to the ilk of Pentangle, smattering their music over the last decade with nods to drone rock and its sludgy psychedelic bedfellows. 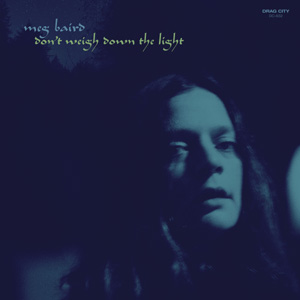 In solo mode, Baird has, by contrast, kept things simple, preferring to drift gently. The latest chapter, though, reveals a more prosaic approach to song writing, weaving in strands of alt. country on the opalescent 'Past Houses' and also during opener 'Counterfeiters', whilst 'Back To You' is as much electronic in composition as it's acoustic. Whether this is an acknowledgment of the limitations of the form as perceived by Dylan forty years past, or some other manifestation of spreading her wings, pleasingly, the changes neither chase away the song's vulnerabilities or erode the album's overall sense of being carefully sketched.

This aside, it can't be denied that the tone is still largely familiar and archaic, a furrow ploughed more recently than on black and white television by Beth Orton and latterly, with much success, Laura Marling. Lacking this air of re-interpretation is where 'Don't Weigh Down The Light' admittedly loses out, more often than not its subtleties ensconced in the Laurel Canyonisms of 20th century beige. Being faithful doesn't automatically mean that the songs here are bland - the title track is dutifully observed, exquisitely played and downright lovely - but this fundamentally is a record for lazy autumn mornings by the sea, a nip that the multi-harmonied, spell/sonnet 'Even The Walls Don't Want You To Go' can't navigate its way out from.

Being harsh, if the overall effect is a little like Florence without the machine, the consolation for Baird and the listener is that many of the cliches the modern troubadours see fit to garnish their work with are avoided with some alacrity here. The epic six minutes plus of 'I Don't Mind' speak most to the singer's integrity, moving from phase to phase with an elegance and introspection often lacking amongst the plethora of coffee house post-graduates now cluttering up video platforms around the world. Not exactly a singular proposition then, but one with its own identity and without the creative paralysis of many peer releases: this is an album which will almost certainly not make its writer a star, but does set a bar of sorts for those artists who also see their future in the past.