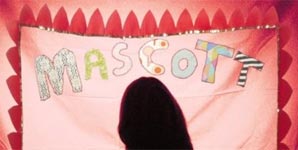 Art Project is the new album from Mascott which is mainly the musical baby of Kendall Jane Meade who is signed to Red Panda Records, with the album being released on Reveal. Meade recently split from a band called Juicy and moved back home to pay off debts and work at her fathers Car Dealership writing prolifically to form the songs on Art Project. Meade certainly would fit in amongst these ladies; Jewel, Katie Melua, Corinne Bailey Rae, and also sounds like a prissy Kate Nash. This album has to be for the hardcore Rom Com watching, fluffy teddy loving, pink PJ's wearing recently broken up clientele. Not wanting to sound like a woman hating woman, I mean I understand this sisters in arms stuff but I find this sort of music so hard to defend. I love when women and girls accept and embrace their femininity but I couldn't help but feel slightly sick and slightly ashamed to have a double X chromosome when listening to this album. Could it appeal anymore to the cliché of young girls or mothers who think they're 'hip'. It almost feels pointless for me to actually review the music on this album. It's what you'd expect from a slushy female singer song writer. Period Pop, Clit Rock, Breakup music call it what you will it's the same sickly sweet emotional love poems that you'd expect a love struck teenager to write for their attractive French teacher in a childish attempt at emotional connection.