Arguably, the biggest rock band on the planet right now is the Foo Fighters. They tear up stadiums to sold out crowds the world over, sell vast amounts of records and, as evidenced by Sonic Highways, do more or less whatever they want. That said, Foo Fighters remains very much the Dave Grohl show, despite the band consisting of flawlessly tight musicians. Well, we've previously seen what Chris Shiflett can do, courtesy of Jackson United and his Dead Peasants' projects, and we've seen Taylor Hawkins take centre stage with The Coattail Riders and Birds of Satan. But what of Nate Mendel? The quiet, dependable bass player, and only other constant Foo Fighter apart from Grohl. Here, on 'If I Kill This Thing We're All Going To Eat For A Week', Mendel steps into the spotlight with Lieutenant. 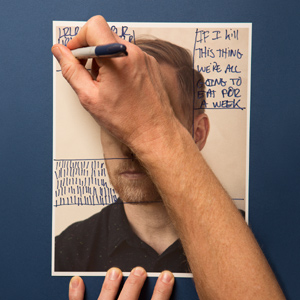 The LP opens with 'Belle Époque', an understated, Big Star-esque anthem. Despite it being quite laid back, there is an awful lot going on here, with pianos and horns trading melancholy phrases with the more traditional rock band instruments. This probably wouldn't have fit on a Foo Fighters record, or even anything by his other former band Sunny Day Real Estate. It is incredibly interesting to hear Mendel flexing his creative muscle, unfiltered by Grohl.

Up next is 'The Place You Wanna Go', which has hints of Jimmy Eat World in its many layers of percussion and instrumentation. Mendel has a fairly apathetic vocal approach, but what this lacks in emotion is made up for by sweet string arrangements and fantastically evocative chord changes.

'If I Kill This Thing We're All Going To Eat For A Week' is an exceptionally varied piece of work and elsewhere on the album you get the slow, swampy noir of 'Believe The Squalor' and the organ led 'Some Remove'. It isn't all gloom though, as 'Rattled' takes in a huge American rock radio style chorus rubbing shoulders with more Britpop style melodies in the verses and 'Sink Sand', whose intro sounds like it could be the mariachi theme tune to a 1970s TV show about detectives. It's wonderfully out there.

In general, what the Foo Fighters' side projects have proven is that these guys can write tunes every bit as brilliant as Dave Grohl's. Lieutenant is a much more fulfilling, artistic endeavour than anything Foos have ever done and it is, in its own right, a great indie record.