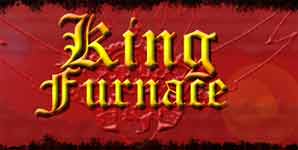 Forming in early 2004, this Oxford trio pride themselves on their reputation for energetic and entertaining live shows. For those interested in investigation this further, you can check out King Furnace in action in the near future, as the band will be on tour from mid-April, including a string of dates in Northern Ireland.

A blend of garage-punk and quirkiness is perhaps the best way to describe "Crash". With shouting rather than singing, and some annoyingly catchy guitar, it'll probably be liked and hated in equal measure. Of the b-sides, "Making Of Me" is most interesting, going from frantic metal riffage to casual acoustic strum. It shows Senator Jefferson (yep, seriously) to actually have a pretty decent voice, but the track itself never really does enough to excite.