Once upon a time there was a band called Hinterland that came crawling from the suburbs of Nottingham. They sounded like an amalgam of Mclusky, Hell Is For Heroes and America's more acerbic exponents of guttural noise rock like Shellac or The Jesus Lizard. Having put a handful of EPs out between 2005 and 2007, Hinterland disbanded gracefully. Or so it seemed. Except guitarist Darren Clewes and bass player Gavin Treliving were obviously planning something more outrageous, some would say ambitious even. Within a few months, Kill Chaos were born, not so much carrying on where Hinterland had left off (although 'Promises Promises' does include reworking of a song from Clewes' former band, but more of that later...), but broadening their horizons somewhat. 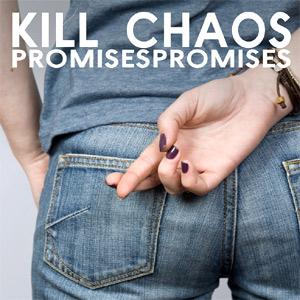 If anything, Hinterland were probably a classic case of "right place, wrong time". Buried amidst a stream of all things anglicised as The Libertines and Bloc Party along with anything attempting to resemble either one immediately jumped them in the queue for recognition. Nevertheless, perseverance can be a rewarding beast and its to both Clewes and Treliving's credit that their desire to succeed and more importantly, be heard has paid off.

Having got through more drummers than a Spinal Tap casting they finally settled on current sticksman Tom Waddingham, and between them they've created an album not only worthy of the statement "Nottingham Rocks!" we see bandied around the city at anyone who can play guitar but also deserving of a place alongside the best the UK currently has to offer. Recently signed to Field Records, themselves a reputable force in underground rock circles having put out excellent long players from Public Relations Exercise, Maybeshewill and Alright The Captain over the past decade.

'Promises Promises' reveals the fruits of their labours. Consisting of twelve tracks in all, recorded, mixed and produced over the past year by the band themselves. Indeed were it not for budgetary constraints, its probably fair to say this record would have seen the light of day much earlier, but que sera sera, as Doris Day once sang. Still, all good things come to those who wait, and while occasionally there's a tendency to let the clichés do the talking ("You've got your fists and I've got my pistol" - 'Fists#Pistol') 'Promises Promises' offers a refreshing antidote to watered down radio friendly indie currently favoured by many of Kill Chaos's peers.

If opener 'Boy Done Good' recalls AC/DC's 'Whole Lotta Rosie' as reinterpreted by Glassjaw, then the melodic grunge of 'Crush' and anthemic 'Falling Down' reminds us of a time when bands like Therapy? and 3 Colours Red ruled the airwaves. Delve deeper into 'Promises Promises' and you'll find gargantuan riffs aplenty ('Make Yourself A Smaller Target', 'Company Of One'), ebullient metal with a pop sheen ('We Came Here To Die') and odes to classic rock ('Futures') which sounds like The Rolling Stones 'Start Me Up' being bastardised by upstarts reared on a diet of early Biffy Clyro and Feeder's 'Polythene'.

'Got A New Drug' finds itself revamped eight years on from Hinterland's first EP, retaining all of its prowling menace that made it and its creators such an enticing prospect way back yonder. Even when 'Satellites' and 'Let's Play Politics' find Kill Chaos in a more refined state of mind, there's barely time to draw breath before the chugging onslaught begins once more. All told, 'Promises Promises' is an impressive debut its creators have every right to be proud of, which in a nutshell, 'Delivers Delivers'.