Review of Wise To The Fade Album by Kevin McDermott 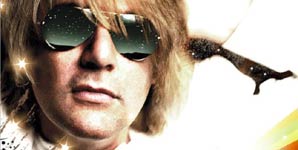 Kevin McDermott is, simply, Glasgow's finest singer-songwriter. Which, when you think about the competition from that fair city, makes him something special - like Bob Dylan sung by Robbie Williams (in a good way...), his songs seem at once like old eloquent friends and like the best new thing you've heard in a long time - anthemic, melodic songs that fit like your best friends after 2 pints in the local. Wise To The Fade is a return to the studio for the first time since 1997's For Those In Peril From The Sea, and a welcome return it is.

This is Scotland's best singer-songwriter's best set of songs in a long while - as witty, articulate, and intensely melodic as ever, and with the unshackled feel of his second album - Bedazzled. If there's a criticism, it is perhaps that the humour dial is cranked up a touch too much. But when an album closes with songs as strong as September Songs (among his best ever) and the quiet, elegiac Voices, that's a minor nitpick. If there's a precedent, it is to 1991's Bedazzled, McDermott's follow-up to his Island debut - Wise To The Fade opens the album like Hole In The Ground opens its predecessor, with a bang and a statement of intent, followed by songs that excite and affect at turns. Kevin McDermott's best work is done live, and this long-overdue return to the studio hopefully signals a revitalized touring schedule. Album of the week.