If one were to compile and perform a statistical analysis on every review written on releases from Kayo Dot's back catalogue then it is very likely that the modal adjective result would be 'challenging' or 'difficult'. Of course, there is nothing actually challenging or difficult about listening to music, but Toby Driver and his ever-shifting collective have always made the listener work for the myriad rewards present within his all-encompassing cannon of experimental post-metal, and 'Hubardo', a celebration of the band's first decade of existence, is no different. 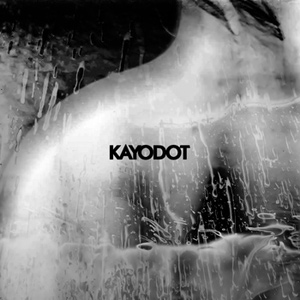 After a series of releases that have been of a staggering scope, 'Hubardo' feels like a long-overdue defining statement. Where 2008's 'Blue Lambency Downward' and its predecessor 'Dowsing Anemone With Copper Tongue' seemed content to peacock the enviable talents possessed by the collective whilst never truly realising the promise presented on their debut album 'Choirs Of The Eye', 'Hubardo' has the feeling of a band throwing everything they have into a single work until their throats are sore, their fingers are bloody and their demons are well and truly exorcised, balancing like a tightrope walker on the invisible line between genius and insanity and never straying far from either.

It is chaotic, urgent and for the most part unrelenting; as dense as a black hole and as dazzling as a thousand suns, but the vast, seemingly impenetrable swathes of sound that effloresce over the majority of its 90 minute plus duration are not the wall of noises they appear to be on first contact but meticulously crafted whirlwinds of melodies that collapse and explode at whim. On 'Zlida Caosgi', pianos and violins tiptoe around Driver's guttural roars and some of the fiercest percussion you will find this side of heads-down death metal, bringing to mind the recent work of Mutyumu and, at times, of The Mars Volta circa 'Deloused At The Comatorium', though the palette here is much darker and the atmosphere is more cloistering, and there is never the suspicion that what you are listening to is just a roughly edited jam session.

Which only makes the light all the more beautiful. For all the abandon of the album's heavier moments, its more subtle ones are crafted just as lovingly. 'The Second Operation (Lunar Water)' would not sound too far out of place on These New Puritan's 'Organ Eternal', with its ebbing woodwind sections and guitars soaked in delay and reverb. Both owe much to the primordial post-rock of Talk Talk, but where These New Puritans share their forefathers' appreciation of silence across their work, for Kayo Dot it is merely the calm before the storm.

One of the most impressive things about 'Hubardo' is that even as it passes comfortably clear of the hour-mark, it doesn't trail off; something with previous Kayo Dot releases, even those a third of the total duration, have all been guilty of since the aforementioned 'Choirs Of The Eye'. There are so many ideas thrown into the first three tracks that it is genuinely astonishing how many new ones Driver and co. manage to weave into each track that follows, from the tribal drums and native howls of 'And He Built Him A Boat' to the suitably epic closer 'The Wait Of The World', where they offer a much more enticing conclusion to the journey - it looked like Oceansize were about to take at the tail-end of their own phenomenal 'Effloresce'.

Kayo Dot are the kind of band you could easily waste a thousand words on, so for the sake of being succinct; with 'Hubardo' they have released the most intelligent, intense and enjoyable 'metal' album of the year, and have finally fulfilled a decade of promise. And then some.