Review of Is Skyscraper Album by Paul Banks 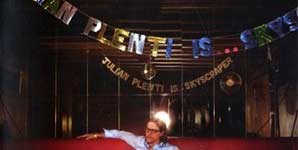 If you didnât already suspect that this is a pseudonym, then put it in the CD player and it should take you approximately 5 seconds to realise that Julian Plenti is in fact the unmistakable voice of Interpol front-man Paul Banks. This oddly named alter-ego of his has been kicking around for some time, but now he has been given a bad haircut, an even worse satin shirt and been unleashed upon the world with his own album â complete with what must be a deliberate attempt at 2009âs most hideous album cover.

As the album itself is in fact pretty good, the deliberately naff packaging choice whiffs of a smokescreen â maybe to guard against those who would see a Banks album and assume it would sound just like Interpol. And the result? Okay, itâs not a million miles away from Interpolâs sound. But with a distinctive voice like Banksâs itâs always going to be difficult to escape comparison from his 9-5 band. In terms of song writing there are certain similarities, but in many respects the disguise element of ...Is Skyscraper has allowed Banks to branch out and experiment. The songs retain the haunting futurism of Interpol but in moments ...Is Skyscraper is filled with a surprising pathos and warmth that hasnât existed before.

âMadrid Songâ is a quiet and beautiful lament with strings, and the refrain: âCome have at us, we are strongâ heavily reminiscent of Radioheadâs You and Whose Army? âNo Chance of Survivalâ is more upbeat and itâs the most poppy song of his to date. But true to form thereâs darkness lurking underneath the sunny melody. As an album â¦Is Skyscraper certainly has a gentler feel than any Interpol album, and in Julian Plenti we have the side of Banks which proves he must have a sense of humour. Could it be that he is actually enjoying himself? That morose exterior must be difficult to maintain all the time. So more than anything else â¦Is A Skyscraper is a genuine surprise. It seems the old saying is true: Never judge a book by its cover, or an alias by his awful shirt.