It's hard to believe that yet another Infest has come and gone already and this year was certainly one of mixed emotions; happiness thanks to the extraordinary efforts of the artists and crew, sadness over the poignant absence of one of the festival's most iconic faces, and frustration over the seriously under-staffed and over-priced bar.

Nevertheless, the prevailing emotion was one of deep excitement because this was one of the hottest line-ups Infest has seen in years.

Friday's music began with Bradford locals and sunglasses-lovers They Called Him Zone. The cocky frontman had a rather annoying habit of smacking his lips together, pouting and pointing, but the music was an encouragingly good start. Slow, melodic post-punk that was hypnotic at first but soon got a bit repetitive.

They were closely followed by Noyce who were very easy on the ear and a lot more lively with their brand of soaring electro-pop and the interesting twist of a violin. The fun really began, though, with the penultimate band of the evening: Accessory. Everyone was thinking the same thing ('That's more like it!') as they introduced their energetic electro-industrial performance, truly warming up the crowd for the evening's headliner.

What can you say about Rotersand that hasn't been said before? Other than that they should have been saved until Sunday night, of course. It's true that Friday ended a lot more spectacularly than it has in previous years and, having played Infest before, they really knew how to please this crowd. This is what Infest is all about; super infectious industrial pop with a charismatic German singer teasing us about Brexit ('F*** you! You left us!'). Tracks like 'Merging Oceans', 'Waiting To Be Born' and 'Electronic World Transmission' were real crowd-pleasers, and 'Exterminate Annihilate Destroy' was the encore everyone was waiting for (well. at least one person, who happened to have an inflatable Dalek with them for the occasion). 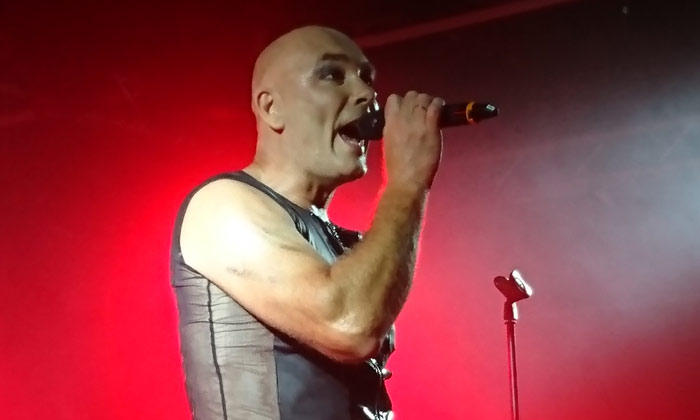 French electronic riotgrrrl Riotmiloo was something a bit different for Saturday. At first I had decided that it was rather an acquired taste, but then as the set went on it was clear that the sound quality was disappointingly poor through no fault of her own. However, she was joined by pal Eva|3 (who worked on her 2015 collaborative album 'La Pierre Soudée') and later Jamie Blacker of ESA and iVardensphere, and together they created a fantastic opening set on the whole.

Chemical Sweet Kid were a lot of fun, though there was an inescapable element of punky alt-rock about them. Their cover of 'Paint It Black' may not have been the best anyone's ever heard but it was certainly still enjoyable. The youthful Empathy Test took a problematic start in their stride and entertained festival goers with their rumbling, ethereal tones that made for a chilled 45 minutes.

The unexpected highlight of the weekend came next with the dynamic EBM group Wulfband. They came out in full force with balaclavas and stockings on their heads to obscure their faces. To prove just how aggressive they were, they staged a bit of a wrestling match on stage - but there was definitely a bit of over-friendliness about it and it was nothing compared to the furious mosh pit that they incited. My only criticism is that they didn't bring any T-shirts to sell. Gutted.

LA's EndUser made for a distinctive breakcore set, with elements of jungle and drum 'n' bass that wouldn't have made him too out of place at a mainstream electronic event. He was the last performer before the hugely anticipated Die Krupps. The Dusseldorf group's set felt a lot more metal than industrial, which rather divided the Infest crowd. 'The Dawning of Doom', 'Der Amboss', 'Metal Machine Music' and 'Fatherland' went down a treat, as did their huge xylophonic instrument made of large metal pipes. You can't deny that their set wasn't high-powered and thrilling, but it wasn't for the non-metal fans of the weekend. 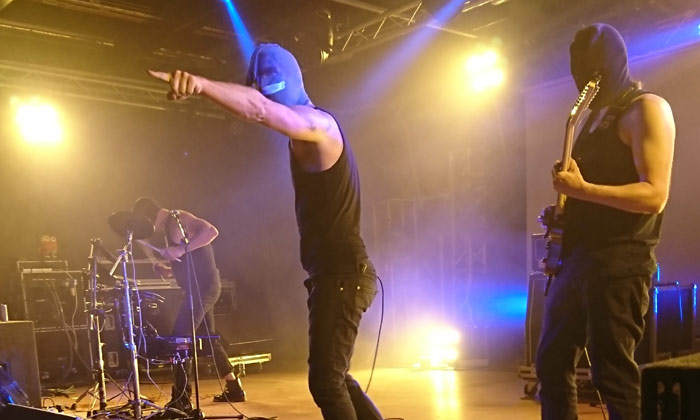 Among The Echoes kicked off Sunday, though their forgettable gothic sound was quickly overshadowed by witch-house musician Sidewalks and Skeletons with his ambient and certainly spellbinding set. I can't say I'd go see him again live, but I'll definitely pick up the CD. Vampyre Anvil, meanwhile, no doubt gained a few new fans after their dark, bass-heavy performance.

The Juggernauts turned out to be a great precursor to iVardensphere, warming up the crowd with a thunderous 45 minutes of EBM. But the latter was a much more exciting moment for the final day; at least seven of them (including the aforementioned frontman Jamie Blacker) creating ear-splitting drum-heavy noise that got everyone buzzing. Their impressive cover of Sepultura's 'Roots Bloody Roots' was a particular highlight, as was the astonishing drum solo we were also treated to.

Of course, Revolting Cocks were the main event of the weekend, playing their debut album 'Big Sexy Land' in full for its 30th anniversary. Paul Barker of Ministry was on bass and they were also joined by Vampyre Anvil's Jason Novak. Singer Richard 23 of Front 242 began the set, but looked like he was about to walk off a lot earlier than he did when his microphone wouldn't work for a painful minute.

But a shaky start was soon remedied by the arrival of new vocalist Chris Connelly (Finitribe) and it certainly ended on a high note with the exuberant classic 'Beers, Steers and Queers', and a take on Rod Stewart's 'Da Ya Think I'm Sexy?' which they previously recorded for their 'Linger Ficken' Good' album.

Not gonna lie, I like food and I was massively unsatisfied this year with the selection. It wouldn't normally be an issue, it's just that it has been better in previous years and I get hungry. Money ran out extremely quickly thanks to unusually high prices at the bars, which was only made worse by the incompetence of the staff (how hard is it to pour a Saltaire Blonde?) but it's a first for the new team so hopefully these issues will be rectified by Infest 2018.

The crew made it all worth it though, doing their best to keep everyone happy all day and working hard to collect donations for this year's charities: Guide Dogs UK, Macmillan Cancer Support and Mind. Also, a big thanks to DJs Fritz, Barbarella, Borg, Simon Briggs, RichHybrid & EskimoBlue, SHIVAR, Katalamode and John E Smoke who all kept the main dancefloor alive in between band sets, and BignickB, Jo The Waiter, Zombie Chris, Victoria and the legendary Dirk Ivens who entertained the Escape Bar.