I'll be honest; when it comes to listening to music, I've never been down for spending money on earbuds. When you're partially deaf in one ear, you know you're never going to get the full experience anyway, so what's the point? 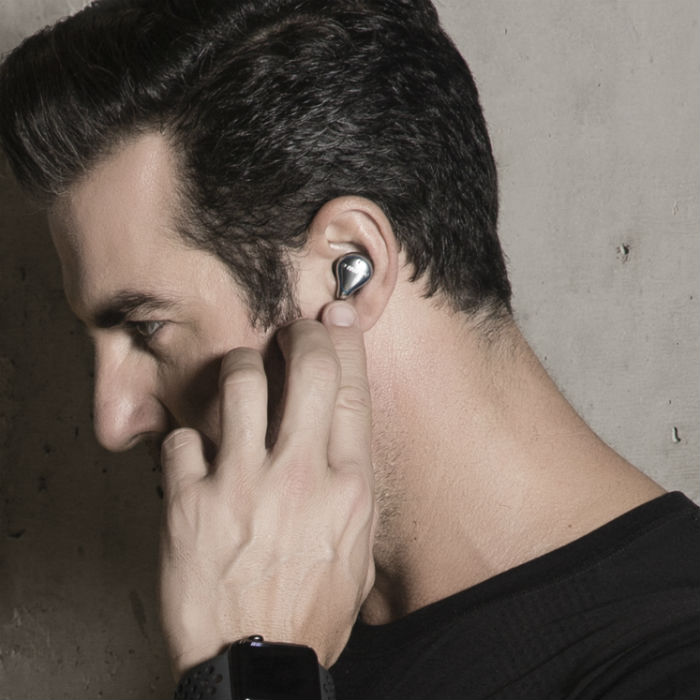 When Apple's AirPods became THE thing to own, I wasn't even tempted. I thought they looked ugly, the price was ridiculous and I struggle to find earphones that fit snugly in my ear as it is so having ones that aren't tethered to me and liable to fall out seemed imprudent at best.

However, there was always going to come a time where I'd give wireless a go, and after roadtesting the Mifo O5 PRO earbuds, I'm proud to say I'm a cordless convert.

Given my issues with earphones falling out, naturally I tend to favour the in-ear type earbuds, and the Mifo buds come with seven different sized silicone tips in total - so you're unlikely to have a problem with the fit. They are also wonderfully lightweight and a beautiful chrome colour that gave me serious cyberman vibes, delighting my inner geek.

Plus, they don't have an inch of plastic sticking out which I've always kind of hated about AirPods; both aesthetically and practically, because my hair loves to get tangled around everything it can.

The issue I have with earbuds is that I generally prefer to have one earbud in and one out when I'm walking around so that I can hear what's going on around me. That's tricky with standard earbuds as you end up with one dangling, getting tangled in your bag strap and eventually pulling the other one out so that they're both trailing on the floor. With the Mifo earbuds, I can have one bud in one ear, my hearing aid in the other and not worry about the other one at all; and the great thing about Mifo is you have the option of pairing a single earbud to your device.

More reasons for getting wireless earbuds over the standard kind is that you save time on detangling wires before you head out the door and they're also a little more discreet; I get paranoid about having a cable on show because I feel like it screams "Mug me!".

The other thing I love them for is sharing. My husband and I often share earbuds on train journeys so we can listen to the same music together, and it's much easier to do that when you are not tethered to each other.

With the Mifo O5 PRO earbuds you get an aluminium case-cum-charging port which is compact and feels solid enough; you can chuck it in your bag and be sure you're not going to crush it. It also comes fully charged so all you need to do is place the earbuds inside it for ten minutes and they're good to go. The cable for the port is bright green so I am never going to forget which device it's for, and it's a thick flat wire so it's also not going to get twisted or tangled. You can get up to 100 hours of use before you need to charge the case (five times more than Airpods), and there's over seven hours of play in the earbuds themselves per charge, so that's about fifteen charges you can do before you need to plug the case in.

It literally took me one minute to set them up with my device (I timed it). The earbuds pair to each other automatically, but there is a way to do it manually if it fails for any reason. They automatically power off after five minutes of inactivity, which is great if you use the timer function on your phone to play music to fall asleep to. Once the timer is set to stop playing after a certain length of time and you're fast asleep, you don't have to worry about wasting charge on your earbuds because they'll switch themselves off soon after.

You can adjust the volume, pause or play, skip, answer and hang-up phone-calls with the tiny buttons on the earbuds themselves which is a godsend if your phone is in the bottom of your bag. The left and right are coloured blue and red respectively, and if you don't remember which colour is left and which is right (guilty!), there's a tiny "L" and "R" on there to remind you as well.

They really do stay in the ears better than any earbuds I've ever used, even in the case of vigorous sports. I mean, if your exercise routine involves violently shaking your head, they're probably not going to stay in. But that'll be the least of your worries when you're in a neck brace.

They're also shock-resistant and waterproof, so you don't have to worry about the rain, getting drenched in sweat, dropping an earbud into a puddle, or even the bath. The Bluetooth 5 wireless technology allows for twelve metres (39 feet) of unaffected sound quality between the earbuds and your device which is great for home, office and gym use.

When it comes to the sound quality, the Mifo O5 PRO have a full-range balanced armature audio driver type which means you get a more isolated, clearer sound and a cleaner treble than you would with dynamic drivers. That's essentially what you're paying more for; the Mifo O5 PLUS offers a dynamic driver which lends a warmer sound better suited towards bass frequencies.

Whichever you choose, you're sure to get a listening experience like no other. They're some of the most durable wireless earbuds on the market and we can't recommend them enough.