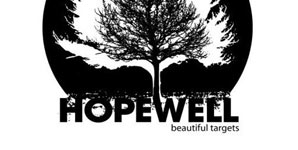 Mercury Rev's climb to fame peaked with Deserter's Songs, which was when keyboard player Jason Russo decided he'd like to give it a go by himself. Which is fair, as Mercury Rev were a bit of a shimmering reedy one-trick pony. Hopewell certainly have more than one trick, although there remains a question, after this third album, as to whether they've fully mastered any of them. With a smattering of indie themes - a bit of Cure, a bit of Blur, a bit of Flaming Lips, and of course a bit of Mercury Rev (but beefed up and rocked out) - Beautiful Targets doesn't rest easy anywhere. A first listen suggests a rather unsettled direction, although subsequent listens do reveal quite a bit of quality. The band do like to do Bowie/ Guillemots-anthemic where possible, but it's on the quieter stuff, like In Full Bloom or Tree, where the glimpses of something better come through. Overall, Hopewell don't set any ground alight, but there is a good amount of soul that Mercury Rev lacked, so Jason Russo may well have been right after all.