Hooka Hey have a back story that's not quite your average bear's. Originally from France, they've now migrated their asses to Austin, Texas, having toured with the likes of Ted Leo and Miles Kane. A quartet accommodating, amongst other members, the groovily named Hugo De Saint Quentin, their name is apparently borrowed from famous Sioux Indian warrior Crazy Horse's saying of which the translation is: "It's a Good Time To Die". 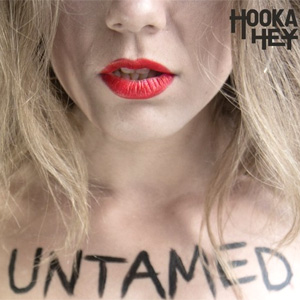 Feral and French they may be, but the music on 'Untamed' has its roots embedded deep in the blues rock contrails of Led Zep and, by extension, their ongoing stream of impersonators. This means that the bar has to be set far higher than with some other releases. Currently this is a land inhabited by the likes of The Black Keys and, taking this and everything else into proper consideration, it means that surprises are often at a premium.

Only a fool would try to match the epic wastes of 'Whole Lotta Love' gone voodoo and, to their credit, HH aren't that brazen. At one end of their spectrum - on the opener 'Nasty' - they're cranking out amped up, patented KOL indie-Americana, all chunky power chords and booming lizard king vocals. Mostly, however, they operate at a sub-punk tempo that never really allows them to work into a groove, whilst on 'Wrong Moves' they digress into the odd psychedelic swirl for good measure. Primarily though, this is kitchen sink stuff: the quartet seem scared about what the consequences of letting this thing fully out of the bag will be. This lower down and dirtier possibility is hinted at on 'Fever', but whereas the experts understand that space and timing are key to recapturing the movement's angst, HH seem obsessed with rolling down the mountain like an avalanche.

The Hookas' main problem here is that 'Untamed' lands smack bang in between the down-home thrust of the Drive By Truckers and the all-conquering Clutch, via their 1995 debut 'From Beale Street To Oblivion'. Is this deliberate? Possibly - and neither band struggles to unit shift its way through the harder end of rock's murky waters. Maybe imitation is the sincerest form of flattery, but the Gallic influence on America's south is far more ancient and primal than this, one that the emigres should tap more consciously next time round. After all, Le Diable has all the best tunes.