There was a time back in the last century when it felt like every artist on the Gnostic 4AD label was like Holly Herndon. People thousands of miles away used to have every release mailed to them at hideous expense: in-house graphic designer Vaughan Oliver was rivaled only by Factory's Peter Saville when it came to creating fabulously evocative, iconic sleeves. Raised in Tennessee, singer-composer Herndon feels like a flashback to the time when the imprint's then-supremo Ivo Watts valued art over commerce, an era where their exotic roster was haunted by the likes of the Cocteau Twins, Dead Can Dance and Bauhaus. Take some of the collaborators on 'Platform' examples: Spencer Longo allegedly makes "Word sculptures", whilst the less spectacularly named Claire Tolan runs a Berlin-based radio show dedicated to ASMR, or Autonomous Sensory Meridian Response for those of you who don't know. Quite. 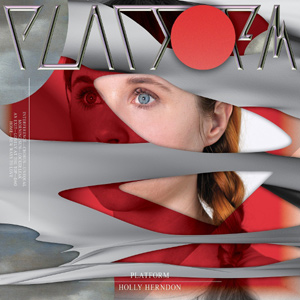 You've probably drawn the conclusion already that 'Platform' - the singer's second album following 2012's 'Movement' - is steeped in the avant garde and full impenetrable nods to philosophical constructs only clever people will get. This is only partially true; whilst some of it positively rows back from the mainstream, only on 'Lonely At The Top' are things uncomfortably weird, the central spoken world character (voiced by Tolan) a masseuse offering funded succor to an unheard client.

In a sense, you can almost allow her that one, work drawn from a peculiar sort of freedom; a futurist who recognises both technology's strengths and weaknesses, what could be obviously stimulating is also easier to connect with than it seems. Having spent several years immersed in Berlin's pre-gentrified club scene, it comes as no surprise that her base is in the synthetics of electronic music, but as with the jarring, glitchy opener 'Interference', this manifests itself in forms neither rhythmic nor ambient. Most of the time words here are Burrows-esque tools of randomness, cut up and re-arranged into things more open to interpretation. Herndon is a former competitive chorister, and the constant pops and shifts here are underpinned on tracks such as 'Locker Leak' with a classicist overtow. The song itself appears to be an oblique criticism of the consumerist world which we now inhabit, and 'Platform' more generally is an album full of commentary, although as on 'Home''s mildly paranoid study of surveillance, many of the references are willfully oblique.

As a performer using intellect rather than instinct to channel their muse, Herndon finds herself in something of a minority. By the time 'Platform''s final track 'New Ways To Love' comes to a chattering, propulsive close, the listener is drawn inevitably to conclusions, both fair and unfair. Statements by the artist such as the one suggesting it should be perceived as "A rupture, a paradisic gesture" are likely to alienate the casual browser, which is unfortunate as most of the album is as refreshingly dynamic as it's consciously different. Looking at it as a pragmatist, anyone bold enough to stand behind that sort of language must be confident that they've bridged the chasm between pretense and reality, dragging the two together by force of will. The truth is a little more prosaic, in that although 'Platform' was created by people using machines, it's as imperfect as any human, the sort of unfinished jigsaw we all are.