Hieroglyphic Being - The Disco's Of Imhotep Album Review

Review of The Disco's Of Imhotep Album by Hieroglyphic Being

It's a long time forgotten now, but one of Acid House's original labels was "The Second Summer of Love", a slightly misappropriated riff on the original Hippie movement's declaration of war on the staid and conventional in 1967's San Franciso. It was particularly in America where this quasi mysticism stuck, but whilst the era is now more remembered for disarming football hooligans and dodgy nudge-wink drug references on Top Of The Pops, dreadlocked Chicagoan Jamal Moss is crafting a whole new folklore around this post-religious belief system via this, his latest in an almost constant flow of releases. 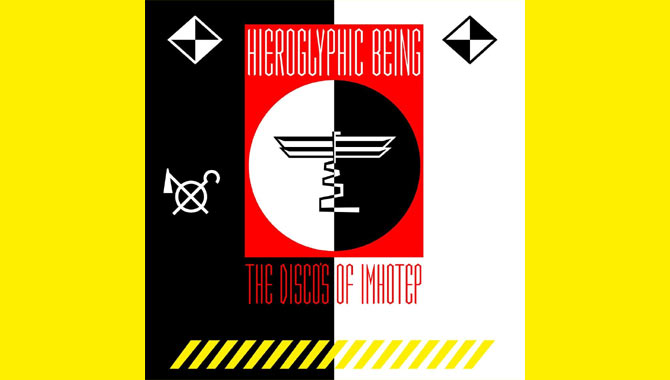 A doyen of the underground who once uncharitably described himself as "An a*shole with a drum machine", Moss is hiding behind the Hieroglyphic Being pseudonym here, but very much in plain sight.  The Discos of Imhotep - an Egyptian high priest of the sun god Ra in the 27th century BC - are filled with expressions derived from what he describes as "Cosmic bebop", "rhythmic cubism" or even "synth expressionism". Nearly 5,000 years later his more erudite description of the music it contains - "Dirty analogue house" does just as well.

There's loads of other chutzpah as well about Binaural beats and stuff, but it's much better instead to let The Discos.. imperious nine tracks and thirty three minutes of machine Nirvana have you dreaming of a reincarnation of your own. Moss spends most of his time here locked firmly into patterns known by men of a certain as belonging to "Intelligent Dance Music", a genre from a period of the early nineties most closely associated with acts like The Black Dog and Autechre. Authentically picking out simple melodies at a 5am tempo, opener The Shrine of The Serpent Goddess gently unravells it's Eastern mountain chimes like delicate birdsong, cypto-temple tunes for the blissed out.

Let it not be said also that at least title wise Moss stays in character - don't expect anything to be christened in tribute to a drum machine; the distortion and grand fuzz of tracks like Heru or the bleeping, acid soaked hosannahs on The Sound of KMT are as alien as the pyramids, whilst the menacing bass and cut up samples of closer Nubian Energy speak in tongues few have ever heard or can understand.

It's possible throwing oneself back over 25 years to relive some of the criticisms levelled at ambient techno in it's heyday, such that the patchwork orthodoxy of Sepulchral Offerings or Spiritual Alliances is neither direct enough for traditional dance floors or beatless enough for headphones only consumption. Both denunciations could apply, but neither will: when joined by their titular cousin instead a sleek motif of flawless groove gives them a fascination beyond that of curious retro-now bygones.

If The Discos...is about healing people, then it's certainly a process which starts with their ears, mind, or feet; all of them will be satisfied by its high concept and dynamic purism, music which comes from the lost and dusty recesses of the late twentieth century. Remember, no map necessary: just bring your sandals and the Shaman will see you shortly.