Review of Hospital Drama Single by Help She Can't Swim 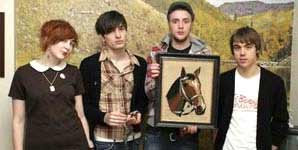 We went to the party spelt P.I.T.Y, The opening lyrics that introduce you to the exciting sound that is Help She Can't Swim. They use every instrument to the point of them exploding, but they keep on that fine line where they are able to play there music out before catastrophe!

Dual vocals that come from Leesey Haines and Tom Denney that then sees more guitar changes in Hospital Drama than you would expect to see in an England friendly managed by Sven Goran Erickson. There is just so much going on with this song, so much so that you need to have at least four or five listens to understand the whole extent of where Help She Can't Swim are coming from. The thing about this bunch of people is that they can mirror this same energy live which is an achievement in it's own right

This band has come along way and the new Single Hospital Drama only backs it up so much more, which in turn makes it exciting to wait for the release of Help She Can't Swim's new album, The Death Of Nightlife.