There are few festival line-ups that would make one consider travelling over six hundred miles via train, tube and foot, but with the thought of Def Leppard, KISS, Volbeat, Whitesnake, Black Spiders and DOWN all appearing in the same French country village, it is hard for any rock or metal fan to back away! 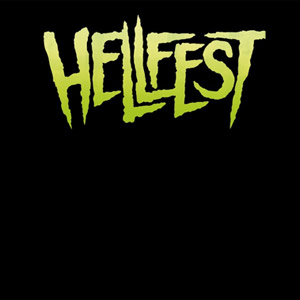 The controversial festival Hellfest celebrated its eighth consecutive year despite religious and political right wing parties opposing the festival stating they would not agree to fund a 'satanic festival'. Despite the opposition, festival organisers have managed to pull together a line up worthy of Hell itself, exceeding other years with new and classic artists alike.

Unfortunately, despite the impressive line-up, the organisation of the festival is poor for those arriving just in time to see the mainstage open (like myself). The shuttle buses/vehicles only slightly bigger then a smart car run infrequently and inconsistently between local village Clisson and the festival field itself, resulting in a mass huddle forming on the street not too dissimilar to a mosh pit though with the festival music yet to begin.

Upon (almost late) arrival, it is clear to see where the time and money has been spent. Themed merchandise stalls offer a wide selection of clothing and novelty items at a surprisingly reasonable price (once you've worked out the conversion rate of the Euro) and artistic structures are built personally for the festival, including the Kingdom of Museadet, a large structure/archway built to lead people to the wine stall and large fire pits that burn impressively throughout the night.

The mainstage opens with German rock band Kissin' Dynamite. Their 80s look attract a large crowd looking forward to seeing similar artists such as Twisted Sister, Whitesnake and Def Leppard later on the same day. As the short set comes to an exciting end, the five piece perform some electrifying stage acting before Dr Living Dead immediately start on the second main stage.

Swedish thrash band Dr Living Dead perform wearing skeleton masks, attempting to create a mascot similar to that of Iron Maiden's Eddie. Unfortunately, they are not as talented, clear or exciting as Iron Maiden, playing notes too heavily distorted for listeners to even contemplate what is making the aggressive sound and the screaming vocals contrast the 80s glam theme of the mainstage. This theme runs throughout the day as the mainstage continues to showcase classic rock and glam artists such as (fairly) recently formed band Black Spiders, paying their respects (I think) to Saturday/Samedi festival headliners KISS with their song 'KISS Tried to Kill Me' whilst the second main stage occupied those death metal and thrash fans with the likes of Kreator, Testament and SSS.

Hardcore Superstars, who formed in 1997, breach the gap between new and old artists such as the following festival bands: Saxon, Europe, Twisted Sister, Whitesnake and finally Def Leppard. What's clear is the influence the five previously mentioned bands have on Hardcore Superstars performing a variety of rock genres throughout their set and are the perfect openers for old rockers Saxon.

The long white hair of Saxon front man, Biff Byford isn't too dissimilar to a Greek God as he storms around the stage banging his head to the classic guitar riffs of Princess of the Night and Wheels of Steel before Swedish rockers Europe perform their classic set. Unfortunately, the majority of the crowd sadly wait around for the Final Countdown, ignoring their modern technical rock pieces. Supergroup Hellyeah take to the second main stage shortly after with their powerful vocals and impressive drumming attracting a notable crowd and making space for those wanting to get a close viewing place for Twisted Sister.

Twisted Sister had three things to say: They weren't going to take it, rock and roll was still alive and, perhaps most enforced, Dee Snider's hair is real! Snider proved this by rolling and jumping around the stage, sending the crowd into a frenzy of applause.

Whitesnake did not receive the same reception; they were unrecognisable due to David Coverdale's ruptured and croaked vocals, making him sound more like he belonged in thrash band Vektor who played earlier in the day. The one hour 15 minute set appeared too long for the front man, being broken up by every possible solo including: two guitar solos, a drum solo and finally finishing off with a harmonica solo which was still more aesthetically pleasing to the ears then the vocals.

Thankfully, Friday headliners Def Leppard proved that, no matter how long you've been performing, your vocals don't have to deteriorate. With an all-hits set-list anybody would have thought the crowd would have been singing along to every word but, for unknown reasons, (possibly the language barrier or different live musical environments) the crowd didn't appear to be singing along with the same emphasis and passion as festivals in the UK.

After sleeping through the majority of heavy metal band DOWN's set, I was fortunate in the fact that DOWN (and previous Pantera) frontman Phil Anselmo performed with heavy metal band Accept during their closing song and therefore I got to witness him in mesmerising action before Papa Roach hit the second main stage, enticing the audience with their modern riffs and Jacoby's fast vocals.

ZZ Tops technical ability was only overshadowed by the superiority of their beards. The band played an entertaining setlist with DOWN guitarist, Kirk Windstein watching in awe with the crowd.

Bullet for my Valentine appeared to have technical issues as the amplitude of Matt Tuck's vocals changed throughout the set. Despite this, the band still managed to energise the crowd to the point where those who were previously at Papa Roach had to make way for further, more aggressive moshing from more hardcore fans as they slammed into one another to the rhythm of the music.

Saturday headliners KISS came onto the stage to the sound of applause over ruling that made by the fireworks. The band put on a theatrical show worthy of live spectacle band Rammstein with the likes of fire, moving stage pieces, fireworks and a zip line that spanned across the audience (not too dissimilar to the one in the Download Festival arena) ridden by Paul Stanley as he performed in the centre of the arena. To those who have previously not seen KISS this would have been a unique experience, however the stage show was too similar to their last UK tour thus making the experience less special and personal.

Symphony X warmed up the crowd who quickly gathered around for Stone Sour where Corey Taylor performed to his usual high standard, personally engaging the crowd who responded with crowd surfing and mosh.

Eurovision song contest winners Lordi showed why Europe (including France) loved them so much with impressive pyrotechnics and costumes that challenged the likes of KISS. The band was obviously desperate in attempting to get away from being a one hit wonder for Hard Rock Hallelujah closing with Would You Love a Monster Man.

Danish thrash n roll band Volbeat headlined the mainstage on Sunday. Again, the crowd seemed vacant but Michael Poulsen's unique vocal style influenced by country and death metal artists like Johnny Cash and Napalm Death singer: Barney Greenman who joined Volbeat for their collaboration of Evelyn kept the crowd interested. The band performed musically successfully interacting with the crowd where appropriate and paying their respect to other influential bands creating a perfect ending to an exhausting but enticing music festival.

This proves that the European metal scene is willing to fight for its place in society despite opposition as Hellfest provides something to fight for. The French food shone through putting UK festivals to shame (particularly with their prices) and the hardcore moshing made some UK rock festivals look like a pop concert. Unfortunately, the organisers are still working on how to operate a large festival and therefore have room to improve on the travelling, however this can easily be over looked by the line up they arranged.

To conclude J'adore le Hellfest and look forward to seeing it develop as a main festival contender to attract further UK festival goers away from similar festivals such as Download and Sonisphere which is rumoured to return for 2014.