UK mentalists Heck (formally known as Baby Godzilla) have built a reputation for themselves as one of the most insane live bands going at the moment. Their recordings are important as well having fused vicious hardcore and noise with good time rock n roll vibes over their various EP's and singles, but it's really Heck in a live sense what makes them so special. If you've seen this band at a festival in recent years, they probably spent next to no time on the stage, instead running rampant around the crowd. At their own gigs they're known to have caused serious damage to places that dared to put them on. Tonight we see why Heck are one of the most exciting things going on in music. 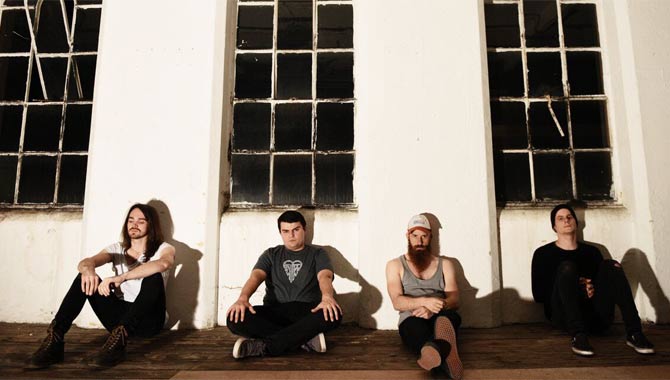 Before Heck inevitably destroy The Key Club though, we have Veins who display a lot of technical talent in their mathcore with lots of all over the place fretwork and tons of crushing groove to even it out. They must know of Heck's reputation and try to match them by ending their set stomping about on the floor. Classically Handsome Brutes are also mathy but with more emphasis on dance sensibilities thanks to their jangly guitar noodling. Make no mistake though they also have plenty of edge thanks to their triple screaming vocal attack.

Relics are a bit of an odd one out on tonight's bill with a more old school metal sound, but they entertain none the less with Sabbath esque riffs and throwing beach balls around.

Regardless of how great what came before was like, what truly matters is Heck's hour. Even if you're fully aware of their reputation, even if you've seen Heck before there is nothing that can ever prepare you for this new level of chaos that they are capable of conjuring up. When setting up on stage they just look like any regular band about to play a Sunday night gig, but within seconds of starting, after intensely, furiously churning out senseless distorted noise from their instruments, the two guitarists/vocalists Matt Reynolds and Jonny Hall are already manically dragging their mic stands to the back of the room and rapidly swinging their instruments between screaming in people's faces. With each colossal breakdown in a song the two guitarists flail themselves all across the room whilst most of the crowd are keeping out of harm's way on the side-lines with their jaws dropped at what is happening before them.

Songs like 'A Great Idea Bastardised' and 'The Breakers' are so simultaneously apocalyptic but groove laden and memorable that both band and fans are driven to completely lose themselves but be able to do it in a rhythmic unison with one another. 'Powerboat disaster' is a masterclass of silly, heavy fun as it causes everyone to bang their heads and bang their whole bodies as well as roar along to its sea shanty styled chorus. It's often one of Heck's own mics that people are yelling into as they just leave them lying around when they're up to something crazy elsewhere having zero care for their gear, all in the name of rock n roll. Bassist Paul Shelley takes a gear case to the floor which is kicked about like a football for the rest of the gig and even drummer Tom Marsh ends up going about with a six string as he switches with Hall. When Heck members just feel like running around screaming, they'll hand their instruments to random people in the crowd for them to just make random noise with them.

It's not just their own stuff Heck are reckless with, it's the venue as well. Reynolds climbs The Key Club's higher architecture, squeezes himself on the bar with his axe and towards the end is being pushed against the ceiling as he's doing splits on top of the crowd. Hall even swipes half the merch off the table so he can shred up there. The most ludicrous thing to happen all night is probably when Hall goes backstage only to bring out two 5 ft long steel bars which he proceeds to use to play slide guitar with. Again it doesn't make a difference if you're new to Heck or have seen them ten times before, you can't help but just gape at this new level of energy they can create. By the end of the gig guitars are defeated in the battle that is a Heck show, just discarded on the floor with all strings torn off each one, just like the metaphorical roof of The Key Club and it's a miracle not the literal one too.

This review may just be listing off extreme things that Heck did tonight, but it's really the only way to talk about a Heck show as they just get up to so many insane antics when they play. Bands going crazy when they play live is certainly nothing new. The Who and The Stooges were doing it in the 60's and in recent times we've seen that torch carried by bands like The Dillinger Escape Plan or The Chariot. The big deal in playing it dangerous at the moment however is Heck. They just seem to have pushed the boat of what is considered wild, further than ever before. If Heck aren't the best live band going, at the very least they're the most mental. If you've not seen Heck before, hurry up, this is a band you're going to want to tell your future grandkids about and make them jealous they weren't around to see them.