Hearts of Black Science - The Ghost You Left Behind Album Review

Hearts of Black Science
The Ghost You Left Behind
Album Review 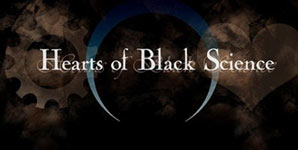 Two young men from Gothenburg, with different interests in music (metal and synth pop), produce an album that sounds like dark Depeche Mode or Midge Ure's Ultravox - as if the 90s had never happened. Synth-rock abounds, all played straight.

Much less arch than Air, there is a Swedish winter freshness and coldness running through every song, and a melancholia that barely lifts, although the Vienna-like portent is ever-present. The band's MySpace credentials are intact, with their self-funded debut EP selling out via that site.

The album's best songs (Miles, Empty City Lights) have a driving rock core, and nods to other genres (shoegaze in particular) are held nicely in check. The Ghost You Left Behind could do with more variety and a sharpening of the darker edge, but for a band that is finding its feet, there is a lot here to build on.