Harpist Hattie Webb not only brought a couple of harps but also Alfabeto Runico bassist Andrea Resce, her brother and a collection of cold remedies to the cathedral city of Canterbury. In between self-medicating with (None drowsy) Lemsip and hot chocolate (Her "hug in a mug"), she captivated the transfixed audience of The Gulbenkian Theatre at The University Of Kent. 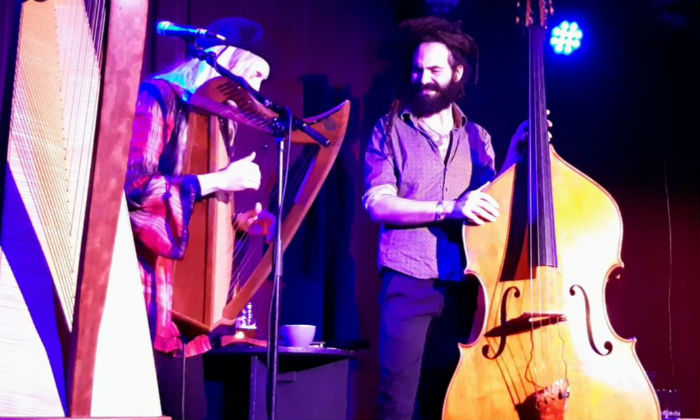 As one half of The Webb Sisters, Hattie has played to huge crowds, touring all over the world with Leonard Cohen and Tom Petty, but tonight the setting was far more intimate and largely focused on her individual material. Book-ending Hattie and Andrea's performance was a spoken word performance from the very talented host, Neelam Saredia-Brayley. She explained in her introduction that Hattie's is the first of this year's performances in the Songbird series, a number of concerts organised in association with POW (Power Of Women), Thanet.

For the most part, the performance was delivered by Hattie and Andrea but for one song Hattie invited her brother, and his bag full of percussion, to join them on stage. Swapping places with sister Charley, even briefly, is no small ask but the surprise sibling guest, plucked from the back of the unsuspecting audience, held his own as he improvised a beat with his maracas.

Hattie performed a few covers during her set. She started "with a Kate Bush song that I love; Running Up That Hill" and also made the Leonard Cohen classic 'Hey, That's No Way To Say Goodbye' her own. The deep bass and high notes of her larger harp Leo were well-suited to the venue but it was Hattie's vocal, despite being challenged by a cold, that elevated this interpretation. Andrea's bass playing, especially when he played his instrument more like a cello, also helped in capturing the inherent beauty in the passionate song.

The Gulbenkian audience were treated to a variety of material, including a new track that Hattie dedicated to friend and collaborator Russ Briffett, and an exquisite instrumental that she had composed with Resce. It was two tracks from her debut album 'To The Bone', however, that really stood out as highlights. Webb's rendition of 'As Long As We're Dancing' was quite arresting. The aching and mild melancholy in the song were brilliantly brought to the fore. After a quick tune of her harp, which she explained was made slightly more awkward by the blue lights behind her making all the strings look like the same colour, she played and sang the song with equal skill. The increasingly intense rhythmic harp of the latter part of the track brought the song to a spectacular end. The opening track of 'To The Bone', and arguably Hattie's biggest solo song to date, 'River', was the other stand-out moment. The faultless vocal and gentle instrumentation were crystal clear and quite spine tingling.

Despite her condition, Kent native Hattie Webb put on a very good show for the audience in The Gulbenkian Theatre. She may have needed the odd tissue, may have had the odd cough and may have wished she'd felt better but it was, in the end, of little consequence as she delighted those before with a memorable performance.