Originally released last summer, this debut record from London trio Happyness is getting a re-issue just as the band are wrapping up in North America and returning to Europe.  As well as shows on the mainland of the continent, they have a number of dates lined up in the UK throughout May. 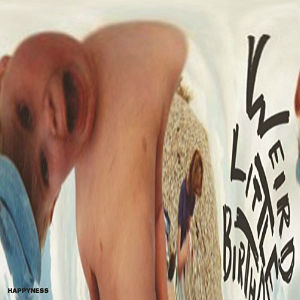 If the spelling of the band's name isn't enough of a clue that these guys don't conform to convention, it soon becomes clear during 'Weird Little Birthday''s acoustic strumming of opener 'Baby, Jesus (Jelly Boy)'.  It ploughs along uneventfully, forgoing any intent for commercialism, and ends just as it seems the song is about to open up.  More regularly than not, common song structure is omitted, though 'Naked Patients' has more of a pop edge and melody, while 'Refridgerate Her' is a delightful rocker that ends all too quickly.  'Anything I Do Is All Right' regains the momentum with some crunching riffs, but the prog-indie of 'Weird Little Birthday Girl' will test many listeners' patience - two and a half minutes without much development is a step too far.  Mellower moments such as 'Leave The Party' and 'Stop Whaling' are simply without interest, with the leftfield approach to songs combining badly with the near-spoken vocal style regularly on display - the results leave little to grip onto.  At 17 tracks, this is a bloated release which is fine at times, but these moments are all too fleeting in an album that is difficult to digest in a single sitting.