Things got pretty exciting for London producer Ghost Culture a couple years back when he signed to British label Phantasy - founded by Erol Alkan back in 2007, Phantasy also plays host to Daniel Avery whose widely celebrated album 'Drone Logic' came out on the label last year. Ghost Culture (whose real name is James Greenwood) is said to have helped produce the album. 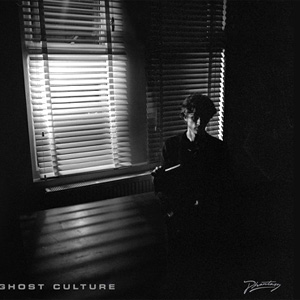 It comes as no surprise then that 'Ghost Culture' would wear the same glossy production that 'Drone Logic' was dressed with. Opening track 'Mouth' was one half of Greenwood's first EP release last year alongside club-favourite 'Red Smoke'. 'Mouth' ripples bright keyboards and bass synth over generous bass wobbles. His voice is subdued, a near-whisper offering echoes of early Caribou. Second track 'Giudecca' (named after an island in the Venetian Lagoon) also saw itself a single release last year and demonstrates Greenwood's knack for evoking an atmosphere - the bulk of the track is warm with exotic vibes until the layers fall out in the middle, distant strings and Greenwood's wistful vocals take it down a more sincere path, before slipping back into the playful melodies that proceeded it. Greenwood's use of bass can feel both playful and gloomy, and both together, making for a reasonably comprehensive sonic experience.

Third track 'Arms' rumbles with deep bass synth reminiscent of dark arcade games. In the same way that Daniel Avery's album was revered for its acidic textural richness, 'Ghost Culture' feels as if it were almost tangible at times, particularly on the more heavily instrumental tracks such as 'Glass' and 'Answer'.

Despite his tendency to produce bass-heavy beats, Ghost Culture's debut is rife with numbers that will throw you off - like on the sleepy 'How' which swells with gentle synth noises and those wispy vocals uttering, 'It's alright, I know. It's alright, I know.' 'Glaciers' is equally as languid and feels intimate and warm, a space-waltz toward sleep. Closer 'The Fog' delivers the same type of futuristic balladry, seeing the album out in a lush display of layered synth.

For a long time in the run up to the album release, Ghost Culture created mystery by refusing to share his name and only using distorted or anonymous press photos. This successfully embellished his internet persona with the ever-functional mystery of the anonymous producer, a recurring marketing technique in electronic music circles. But Greenwood is not the stereotypical anonymous beat wizard his anonymity might have begun to suggest, with him having previously suggested his album was less of a club album, and more of a headphones experience.

Ghost Culture's vast list of influences are span house music, synth pop and European techno styles with regular dashes of psychedelia. His use of these styles with an evident knowledge of pop songwriting is a combination that makes for music that is not only extensive but accessible.

For those whose interest in this guy was sparked by his widely popular instrumental tracks ('Red Smoke' and 'Half Open'), you may have to hold out for the future. 'Ghost Culture' is an album whose brainchild approached it as a songwriter rather than a DJ. Nonetheless, 'Ghost Culture' demonstrates not only Greenwood's wide musical palette, but also his proficiency in cherry-picking elements from all over and making them work in one very consistent, very relevant whole. The album is a feat for 24-year-old James Greenwood, although might not have the club aesthetic that helped bring in a lot of interest.