Review of Complete Recordings Album by Frank Black and The Catholics

Frank Black's continued curation of his career highlights seems to be an ongoing process. Following the somewhat successful resurrection of The Pixies that reached a pinnacle last year with their first new record in two decades, Black has now turned his attention to The Catholics. 'Complete Recordings' is an impressive slab of Black's lesser-known material that has captured the hearts of his faithful following through the box set's PledgeMusic roots. The big question though, is does the material warrant this lavish retrospective treatment? 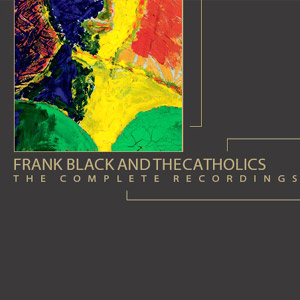 To be honest, the answer is yes. Even the most ardent Black fan will only have passing familiarity with some of this material. Unlike many of Black's other guises, The Catholics had a constant approach, which means that the tracks don't sit awkwardly beside each other in this sort of compilation. Indeed, the two ground rules for the Catholics were to play the songs live and primarily on a two-track recording. That rough and ready approach is overwhelmingly apparent, and welcome when re-assessing this material with fresh ears.

However, if this release is meant predominantly for those already indoctrinated into the church of Black Francis, is there really any need to buy these albums again in a new package? Again, the answer is yes. Not only do you get the six officially released albums, but B-sides and the aborted 'Sunday Sunny Mill Valley Groove Day' album that was given away at gigs in limited numbers as well. There are also a number of demos hiding away here and most importantly a seventh disc of unheard 'technical demos' for the 'Black Letter Days' record. These are perhaps the most interesting of the more than 130 tracks on offer here. Embryonic and raw, they offer a glimpse into Black's song writing process. They're surprisingly detailed sketches that, unlike some bonus material on similar sets, do deserve to have been unearthed.

As you'd expect though, nothing involving Frank Black is ever straightforward. Across the first six discs he's elected to sequence everything in alphabetical order, thus stripping any sense of chronology to proceedings. This throws up interesting results, but does remove any affinity one may have to a particular period or record in the Catholics' six year run. Black says this is to appreciate the body of work as a whole, a noble sentiment that means demos sit alongside their definitive studio incarnations. That's great for those analysing things with a fine tooth comb, however I'm not sure I needed three versions of 'Humboldt Country Massacre' back to back, no matter how radically different they are. While the concept of abandoning chronology is fine, perhaps rounding up the duplicates and alternates on a separate disc may have been preferable.

'Complete Recordings' stands as an alternate reality version of Black's very own 'American Songbook'. It's like a laid-back road trip across the U.S. with Black finding inspiration everywhere he looks. There's little of the spiky angst that defined The Pixies' sound, instead there's some pretty straight forward but rewarding Rock 'n' Roll amongst other things here, which is no bad thing. It's difficult to single out particular songs or performances because there's so much material. However, if there's a benefit to be found in Black's sequencing, it's that one of his best ever singles ('All My Ghosts') opens the set. More than just a collection of the Catholics' albums, this really is the definitive picture of an under-appreciated period of Black's career. For anyone with an interest in The Pixies, this is an essential view of the chapter that followed that band in the bible of Black.