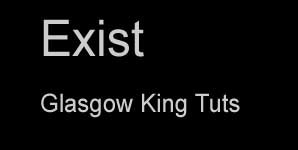 With the support slot for Rick Witter (of shed seven fame) and his band The Dukes, and the approval of Mr Steve (Richey cut his arm for me) Lamacq, this quartet (Matt, Simon, Chris and James) from Dudley must have something going for them. Thus I decided to blag a spot on the guest list and find out what all the fuss was about. So Mr Lamacq has described them as being the "Best New Band In Britain", no pressure on the band whatsoever to pull off a great gig then (in sarcastic tone!).

Having heard a few tunes on the infamous myspace I decided the band sounded ok, but would they perform on the night?? I need not have questioned their ability because they performed and then some.. With a sound similar to The Music and the Stone Roses to name a few, this band still have a uniqueness of their own, finally a band not trying to sound like the libertines (hoorah!).

The only downside to the gig was that they didn't play long enough! They played tracks like the fantastic 'Just Another Stranger' (which is now my space profile song!), Paper Monkey and the brilliant debut single 'The Fear'.

With British bands having a shelf life now of a couple of years, its about time that some new talent came through and brought back some good old fashioned indie music, not all of us want to hear 80s punk wannabees 24/7. Everything is good in moderation, but even I cannot get enough of this band right now. Well worth purchasing the new single (available online through hmv) and taking a look at the website and of course seeing them live. If this band does not get snapped up shortly then it will be a tragic waste! This band is definitely on to big things! Oh and Rick Witter wasn't bad either.