Review of Heart = Weapon Album by Every Move A Picture 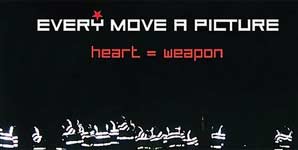 Though they had been friends since childhood, Brent Messenger (vocals/guitar) and Joey Fredrick (bass) only formed EMAP in 2004, having dabbled in various other bands in the San Francisco area. Supporting the likes of Kasabian, Kaiser Chiefs, and The Futureheads, they earned a reputation as an impressive live act, and landed a slot at the Carling Festival 2005.

To a fairly strict formula, EMAP produce what has come to be known as 'art-rock', with something of an electronic twist to it â think a mash up of Franz Ferdinand and The Killers. Simple and catchy riffs are combined with soaring keyboards, such as on "Mission Bell", to create something that is becoming all too common. Sure, the dance grooves melt into the mind, but there's certainly nothing new to be found here. "Signs Of Life" is more of the same, but the album rarely drifts from the status quo, meaning there are few standout moments â either good or bad.

There are times when the quartet threatens a little adventure, such as on "Chemical Burns", where they abandon the synths in favour of all-out guitar riffs. Whilst infectious during the verses, they fail to deliver the killer chorus that is deserved â and this is ultimately the downfall of EMAP. They've got the riffs and groove, but lack the hooks. There aren't enough moments that take you in and refuse to let go, nothing instantly memorable and aching to be heard again.