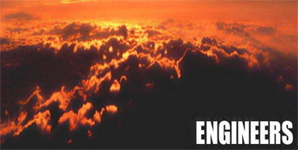 You may think that engineers are the people behind the creation of the pyramids, the nuclear reactor, the submarine and the hot air balloon, and I wouldn't disagree with you. Essentially, engineers are people who make things better, whether it's a canoe, a jet engine, a Ferris wheel or a 13 track album filled with elegance and grace.

The four men that have created the album 'three fact fader' fall into the category of people who make things better. They've got the elegance and grace thing going on too. They've definitely had a good wedge of time to improve upon than their last album, which was given birth back in 2005. In the meantime, there's been plenty to pluck inspiration from in the dream pop world. Especially with bands like 'My Bloody Valentine', 'Air' and 'Sigur Ros' making a comeback over the past couple of years, injecting a new lease of life into the distorted and ethereal worlds of shoegazing musicians.

There is a lot of material crammed into this 56minute album, and although there are 13 individual tracks, each one takes you on a journey of sound that describe numerous stages of an epic quest.Quite a slow, relaxed and happy quest, not the perilous type that drags you to Mordor! The music is very visual and rich with texture, with long and drawn out soft melodies that build upon themselves in a pure and clean way. The melodies are elongated, which makes them sound smooth and calming, although there is a steady torrent of subtle pitch tweaks and distortion writhing beneath the warm blanket of sound. Snug as a bug in a rug.