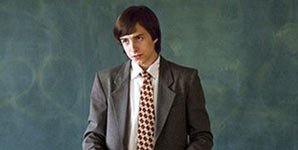 Any occasion that puts more Eef Barzelay music on the shelves is good news. The front man and songwriter for Clem Snide does indie lyrics better than almost anyone else, told in a timeworn edgey voice that conveys emotion perfectly, and a razor wit. Here, the soundtrack to a film that's not out here yet is a great way to be exposed to his music - alongside a couple of tracks by Violent Femmes, there is the whole range of his songs, from aching love song to whimsical interludes.

The film soundtrack gives him a story to convey, and many of the tracks are linking passages, not songs as such, but always compelling. But it is on the songs, such as Girls Don't Care, Do You Love Me, and especially Fight Song Melodies, that fans of Clem Snide's work will find the gold in this stream of consciousness. This isn't the best way to dig into Eef Barzelay - any Clem Snide album gives more songs to work with - but it will hopefully expose more people to his music via the cinema screenings.