'Songs' is the sophomore album release from Daniel Woolhouse, aka Deptford Goth (Yes I know, I'm not sure either, it could be ironic, humorous, tongue-in-cheek, who cares, The Stranglers thankfully weren't stranglers either) Following in the impressive and well received footsteps of its 2012 predecessor 'Life After Defo, 'Songs' brings us more of Daniel's introverted and introspective personal examinations. This time around however Daniel is in a more "joyous" state of mind and has become "more accepting" of his own voice all of which means we hear more words than mumbles and the songs are more traditionally structured. 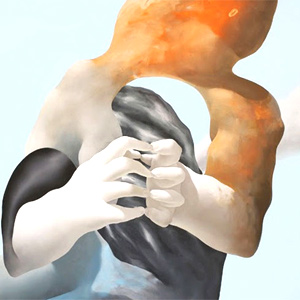 The former primary school teacher is certainly no stranger to telling a story and through the serenity of 'Songs' he imparts some touching and tender tales. The first track lifted from the album, 'The Lovers', tells of life's journey through a couples' personal prospective. The layered vocals and extended keyboard strokes sit aside each other to create an intoxicating mix. 'Code De Clicked' is a little less hazy but no less capable of holding you in its enveloping sound.

There are some wonderfully worked arrangements across the whole album that draw you in and capture you completely with their sparsity and beauty. 'Do Exist' is just such a song, its delicacy and fragility are achingly delivered to create a soundscape strewn with deft touches and a lightness that knows instinctively that less is more. 'The Loop' and 'Dust' are similarly effective, the first, showcasing Daniel's vocals to great effect, for its minimalist production and high harmonies and the second for its soft, touching brevity.

There's a mellow warmth that blankets songs throughout. Once you become immersed in the relaxed ambience of the sound Deptford Goth has created you almost feel as if you've entered a transcendental state as the music washes over you in gently lapping mesmeric waves. If there were ever eleven cohesive tracks created for your "Headphones Moments" then these could well be they.

With Songs Deptford Goth has clearly become more comfortable and confident with his own performance. Comparisons to James Blake and Jamie Woon still stand but DG has now become much more of a natural singer-songwriter at times here bringing to mind Patrick Watson or even James Vincent McMorrow. As if to mark the change DG saves arguably his best until last on the final cut, 'A Shelter, A Weapon'. Woolhouse excels in his most flamboyant and expressive performance to date highlighting why Songs is a great leap forward but also providing a glimpse into a very promising future.