Dem Franchise Boyz - On Top of Our Game Album Review

Dem Franchise Boyz
On Top of Our Game
Album Review

Another musical movement courtesy of the South and So So Def is "snap music". Think of 'snap music' as a laid back version of its predecessor 'Crunk music' (championed by Lil Jon and Tha East Side Boyz), and it's what you experience listening to 'On Top Our Game' Dem Franchise Boyz' new album.

Typically, the tracks on this album favour up-tempo whistles and finger snaps without much variation, but rapper Bun B on 'My Music' and crooner Trey Songz 'Freaky As She Wanna Be' add a much needed diversity. Dem Franchise Boyz are also joined on the album by Grammy award winners, Three Six Mafia, Peanut and Charlay, Jim Jones and Damon Dash and these collaborations lend a much needed , though limited, breadth to an otherwise monotonous sounding album. You'd be forgiven for not realising when a song finishes and another one starts because there's not much change in the thumps, drags and snaps from one song to the next.

The album has their hits "I Think They like Me" featuring Bow Wow and Da Brat and "Lean wit and Rock Wit It" but others songs like "She Freaky As She Want To Be" and "Ridin Rims" are the hits the Ipod generation will soon be blazing on the radio and in their cars this summer. It's a newly emerging club-oriented style that's been tagged "snap" music by street-level music lovers. There is no doubt that a stream of club bangers can be found all over this album and there's not much else to say about it because, unsurprisingly, it lacks depth. 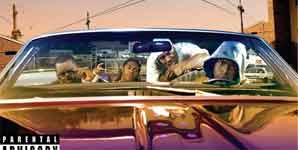 Overall, it is an average album, with no real depth that reveals any rap/hip-hop talents (real or latent). It's a huge hit in the US, their hits are currently tearing up the clubs but I doubt the album will get that many spins on this side of the oceanâ¦