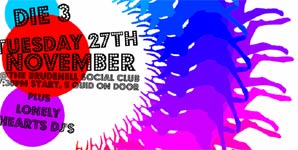 Christ. What the hell was that?

The night's called DIE3 for a start, which sums it all up rather nicely, and gives a pretty clear indication of what everyone's brains have done by the end of the event. It comprises an eardrum-melting mixture of free-jazz, psycho-poetry and - basically - cacophonous noise, and is headlined by a band with a mildly disguised, very naughty word in its name.

Just another night at Leeds' Brudenell Social Club, then.

Ad Hoc sits on the floor in the middle of the room, wearing a balaclava and surrounded by effects units, stuffed toys and a switched-off lamp shaped like a bird. He generates grimy beats from modified white noise, and layers above it a sequence of bleeps, bloops and other obscure bits and bats. It's all surprisingly rhythmic considering its genre and its semi-improvised nature, and it gets a few heads nodding (though two people also stand at the back with their fingers in their ears). It's sometimes a little too improvised, with Mr. Hoc frantically pushing buttons in an attempt to 'make it all work' on a couple of occasions, but it's generally enjoyable, and sufficiently bizarre for it to remain interesting until the oven timer sat by the stage (seriously!) pings after half an hour.

Noah Brown, of Babyfood and Yes Boss fame, delivers what has to be the scariest spoken word set ever witnessed, and the moderate crowd in attendance doesn't seem sure whether to collapse in fits of giggles or head promptly for the fire exit. From a list of horrendous insults ('your grandparents hate you, and desperately hope they outlive you!'), to a painfully sarcastic engagement congratulation, to a fondly-recited tale about 'smashing the f*ck' out of a swan, it's highly engaging throughout, and Noah delivers it with enough clarity - and just the right amount of insanity - to keep the room captivated until the end.

Widow's Peak presses play on a laptop, twiddles some dials, then screams and screams and screams. And then screams some more. The whole thing sounds like someone scraping your brain out from the inside and feels like being repeatedly punched in the crotch by Mike Tyson, and a handful of people become chain-smokers for the duration of the set. Notably, no one seems to have any idea whether it's any good or not - but it still provides the talking point of the evening. A good sign? Most probably.

The bizarre night draws to a close with Deathqunt, a hyper-speed free-jazz trio with a huge amount of instrumental talent to showcase. The drummer must be among the finest ever to grace the stage at a venue that's seen its fair share of magical musicians, and the guitar/saxophone craziness supplements it nicely. Still, it all comes across a little contrived: alternative for the sake of being alternative; fashion for the anti-fashion crowd. Deathqunt are near-impossible to fault technically, but - despite some excellent beats and breaks - there's disappointingly little warmth to their music.

They win points back, however, by having a member with the word 'vagina' scrawled across his prosthetic face. Which always makes a gig better, right?