Death and Vanilla - To Where the Wild Things Are Album Review

Sweden's Death and Vanilla trade in dreamy, psychedelic pop music, bringing in influences from all over the place, from The Velvet Underground to Krautrock. On 'To Where the Wild Things Are', Death and Vanilla deliver a veritable smorgasbord of trippy delights. 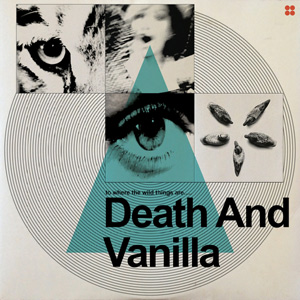 Well, almost. The album opens with 'Necessary Distortions', a six minute exploration into sinister vibes and mantra-like repetition. It sits on a motoric drum track which takes its cues from Can. There is a ton of delay and effects on the vocals but sadly the song never really goes anywhere. It isn't the most impressive opening salvo, and the lyrics of 'Isolation/ Oscillation' grate after a while, and veer perilously close to Howard Moon's 'Isolation' song from The Mighty Boosh.

What becomes apparent as the LP progresses is that Death and Vanilla are very good, if not masterful, at creating atmospheres but are left wanting when it comes to crafting actual songs. 'The Optic Nerve' sits on delicate, intricate guitar figures and 'California Owls' takes in a really twee indie vibe while 'The Hidden Reverse' is a strange, mutated spaghetti western jig. Aside from their general tones though, there is very little that is memorable about these songs.

Even the album's highlights are inoffensive and quite bland. 'Arcana' sounds like Yeah Yeah Yeahs unplugged in a forest on ketamine and the ELO aping intro of 'Time Travel' threatens to inject some energy into proceedings, but nothing stands out here. It is all very unobtrusive.

As far as creating soundscapes and atmospheres goes, Death and Vanilla are a very talented band, they just forgot to do anything interesting with it.