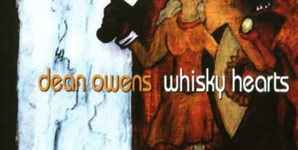 It is not hard to remember that the roots of country music are in celtic folk when listening to a Scot singing rock like Steve Earle. This is Owens' third solo album since fronting The Felsons. Recorded with a band of musicians whose provenance reads like a who's who of American rock - Al Perkins (Rolling Stones, Flying Burrito Bros), Jen Gunderman (The Jayhawks), and Will Kimbrough (only the American Instrumentalist of the Year!) - Whisky Hearts recalls an album like Ryan Adams' Gold in its mix of Springsteen rock and gentle balladry.

Russell Brand oddly called Owens the 'Johnny Cash of Scotland' which makes no sense - it's hard to hear what parallels could be drawn to Cash. Instead, this is a proper singer-songwriter disc, like Kevin McDermott-does-Nashville - properly rounded songs, with tasteful instrumentation - think Adams' incarnation in Whiskeytown. The disc could maybe do with some trimming - at 15 songs, it's maybe a couple of songs too heavy around the midsection: May and Just Another Sunday are nowhere near the perfection of Raining In Glasgow, Years Ago or the title track. Man From Leith, a tribute to his father, is a great closer. Whisky Hearts is a wonderful album - Owens deserves the bigger audience he is sure to gain.