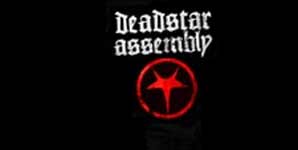 Deadstar Assembly are going to be huge, you can be sure of that. They have the perfect, almost mathematical blend of extreme visuals (think Marilyn Manson as image consultant), and pseudo-aggressive sound that the black-clad hordes will lap up. It is sometimes slightly amusing though to listen to bands whose image conjures up more than the music can deliver. Think HIM, think Lordi, why not think Manson himself. The image is classic parent-frightener, but if you listen closely to the actual music, there is nothing truly extreme. How else can you get 14 year olds to listen to this stuff but to create a watered down version of industrial rock, riddled with the appropriate levels of angst, self pity and misery essential for teenage ears.

Cynicism aside, Unsaved is a supremely polished blend of melodic industro-rock, with occasional elements of electronica. The band manage to veer coherently between the HIM-derivative strains of "And Ashes Will Fall", to the more Manson-esque tones of "Dejected". It would be nice to hear the electronica elements of their sound extending beyond the intros to their songs, since at present they simply hint at a greater potential depth to the sound.

Fans of Manson, Reznor and HIM will lap up Unsaved. Deadstar Assembly â coming to a black hooded top near you soon.