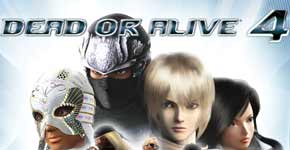 Dead or Alive 4 is making a late appearance on the Xbox 360, but thankfully it has now arrived. It's certainly been worth the wait for the great visuals, lightning fast game play and an original online mode. This is the best game in the Dead or Alive series.

When compared to Dead or Alive Ultimate the differences aren't that easy to see, when you first play. The fighting is easy to get into, all the same moves appear to be there and your old strategies seem to be effective. The differences are subtle to start with but begin to become far more obvious the more you play. You will start to notice players have new moves and some of their old moves have been modified and tweaked as well as the core fighting system. You start to realise that Dead or Alive 4 is faster, smoother and more tactical, over all it feels much better than previous DOA games.

Dead or Alive series has always been attack orientated, defensive play is never a winning formula and hesitancy will be punished every time. Wildly hammering the buttons to get your fighter to kick and punch in any which way is not going to do you any favours either. The main key to the DOA game play is timing, counters and reversals need spot on timing and very quick reactions. When using combinations timing is also key, sometimes combos require very quick movements on the controller and other times the timing needs to be slowed down somewhat, but each time the commands need to flow.

Behind the game is a very complex version of scissors, paper, stone which all fighting games have underlying in the game play. Many fighting games don't seem to focus on variation, so one move can be repeated over and over again to win the fight. Dead or Alive 4 does not have this problem. To win fights in Dead or Alive 4 you must think on the move and follow up with a command in a split second. Repeating moves will just get you a good hiding from the computer. If you don't vary your tactics you will find yourself going backwards very fast. Once you get your timing, rhythm and a decent knowledge of moves to change tactics DOA4 is incredibly fluid. As you play you will begin to find moves which will knock your opponent into the air and will give you a great chance to punish them with a devastating string of follow up attacks.

The huge roster of characters is going to be one of the main attractions to DOA4. Some of the old favourites are back, some that have made only a couple of appearances before are back like Brad Wong, the drunken bloke, and then there are some new additions such as Kokoro who specialises in open palm attacks. There is a young boy called Eliot who uses the praying mantis style. With there being such a great selection of characters to choose from you should find at least two that will suit you better than the rest.

The arenas and environments are multileveled in usual Dead or Alive style. This has been taken one step further in DOA4. As well as kicking your opponents through windows, off balconies and down cliffs you can now send your opponent flying over railings and best of all, into on coming traffic. This seems to be one of the biggest and certainly most obvious changes; the environments/arenas seem far more interactive than they ever have been before. Apart from being more interactive the arenas and environments are far more varied and this time as it's the Xbox 360 they look amazing. Arenas vary from street market, to safari park, to water pools, to a Jurassic park type arena. In the safari and Jurassic environments animals and dinosaurs can come from nowhere and knock you or your opponent off their feet. Loads of the levels have lots of breakable objects and many have large drops. All in all there's loads of variety here and it makes the game so much more enjoyable to play.

Apart from the standard story mode which is the best place to unlock more characters and costumes the other modes are very standard. The really good one is the online section. The online mode offers a few variations on the standard game but all feature the excellent virtual arcade system which simulates the good old days. Basically you wait your turn and if you win you stay on, it's a fantastic idea and very original. There is quite a bit of waiting in some scenarios as each lobby has a limit of 16 people which is quite a lot of people to wait for. The other way around is to create your own or find another match with a lesser limit. There are a couple of variations that can be set, the default is winner stays on, but there are other modes which enable the host to stay on and keep challenging new comers weather he wins or looses. Technically DOA4 holds together in the online mode, you will occasionally find the game may lock up after long periods of use online. The responsiveness of playing online is very comparable to playing offline it certainly won't hinder your progress. However when you watch a game you can see considerable lag.

DOA4 looks very similar to all other Dead or Alive games, but the Xbox 360 version has been tweaked to look absolutely brilliant, especially in HD. The animation is ultra smooth and the characters move with exceptional speed. The characters look very nice, but they don't look real in anyway. The facial textures are far too smooth and perfect resembling cartoon characters or dolls more than real people. The arenas and the environments are probably the best visuals in the game. The water in a couple of the levels is fantastic, although it doesn't splash enough when characters kick and fall in. If the characters were not actually on screen in the arenas you or anyone else probably wouldn't think it was a fighting game, it would probably look more like an RPG like Final Fantasy.

The audio is very similar to all the other Dead or Alive games. As usual all the characters with the exception of one or two talk in Japanese with English subtitles even though many or the characters are from different countries around the world. But that is how DOA has always been done and I quite like it as the game looks so Japanese. All the effects are pretty similar to those from the past but they still sound pretty painful. The introduction to the game features Aerosmith which will please some, the rest of the game is made up of the usual upbeat music you will recognise mixed up with some new tracks.

If you like fighting games Dead or Alive 4 should be purchases straight away. It is as good as any fighting game that has gone before it and I don't mean just the DOA games, DOA4 is a serious competitor to the likes of Sega's Virtua Fighter and Namcos Tekken and Soul Calibur series. The offline modes are great fun and there is always some sort of reward for making progress while the online mode offers a huge amount of longevity.