Intimacy has its benefits and drawbacks in relation to live music. It can be an unparalleled thrill to be within an arm's length of an artist, to see the beads of sweat on their brow as they perform, but it can also be overwhelming to be crammed into shoebox venues with little room to breathe. The function room of Manchester's Briton's Protection, a firmly traditional 200 year old pub specialising in whiskey, is certainly intimate and as such perfectly suits the bare, naked fragility of the music of DBH, McWatt and Tekla, but it means a crowd of more than a couple dozen can cause capacity issues, as happens on the launch night of DBH's 'Time Flies' LP. 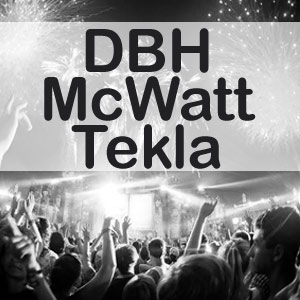 It means that before tables and chairs can be removed from the room between the sets of support acts Tekla and McWatt, the temperature and overcrowding can be more than a little distracting, which is a shame as the understated folk of Tekla Szerszynska deserves your full attention. It is stark yet still filled with enough human emotion to entrap you, like the introspective soliloquies of Timbre or Mark Kozelek on the midpoint of both his Red House Painters and Sun Kil Moon projects. A little feng shui makes things more bearable for the performance of McWatt; a modern chamber-folk duo whose playful, slightly loose melodies bring to mind A Hawk & Hacksaw and parts of Neutral Milk Hotel's 'On Avery Island' more than Stravinsky or Shostakovich, but there are certain parallels to the building, cyclic melodies of the latter.

The room returns to sardine-room only, however, before the arrival of the headliner. It is apparent that much of the audience are friends of DBH, Dan Bridgewood-Hill to give his full name, or part of the scene that encompasses his other projects Nasdaq, FTSE 100 & Burnst, but there is none of the 'cliquey' atmosphere one would expect to come with this; the room is supportive and attentive, surprisingly so given the conditions, and anyone whose comments encroach his carefully plucked guitar lines are promptly shushed.

Which is a relief as the meditative, flowing nature of DBH's music requires full absorption from start to finish. It is simple, beautiful music for drifting off under the stars, not hotfooting to avoid cramp; barely touched by effects and left to ring out at its own pace. His playing style is comparable to the aforementioned Mark Kozelek, or even Opeth on their baffling left-turn Damnation, but the way it blossoms assuredly but without care for brevity or strict adherence to structure is more akin to the work of Stars Of The Lid or Hammock, in spirit if not execution. There is little variation from start to finish, whether in relation to a particular song or his set as a whole, but the journey between the two points is still an immensely enjoyable one, no matter the conditions in which said journey is taken.