David Hoffbrand - To the Sound Of A Different Drum Album Review

David Hoffbrand
To the Sound Of A Different Drum
Album Review 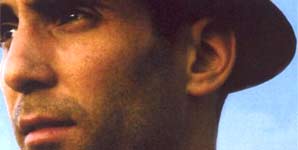 'To The Sound Of A Different Drum' is the Brighton based, singer-songwriter David Hoffbrand's latest studio album. This record is made up of country-tinged textures & harmonies with warm acoustic tones and melodies. The lyrics are very tired and very easy to digest, sometimes lending to the most obvious rhymes. David is also a Christian and references to his faith appear throughout.

If you were hoping for something at least slightly thought provoking then you will be hugely dissatisfied. And with David's influences apparently ranging from Hendrix, Zappa, Tom Waits and The Velvet Underground you would expect something at least slightly challenging or interesting, but rather disappointingly, yet rather inevitably - drug-induced art never did draw many similarities with Christian, country-pop.
Unfortunately 'To The Sound Of A Different Drum' is one of those records your likely to find confined to your local supermarkets bargain bucket within coming months. Disappointing.