David & The Citizens - Until The Sadness Is Gone Album Review

David & The Citizens
Until The Sadness Is Gone
Album Review 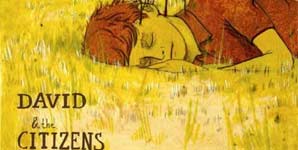 A Swedish band that sound like the best of American indie-pop. Like Danish bands The Figurines and Epo-555, David & The Citizens manage a lovely bounce and upbeat feel to their indie-ness. Never less than 'alternative', bandleader David Fridlund sounds like Bright Eyes' Conor Oberst, but sparkier and happier. In sound, the band recall early Counting Crows and XTC - a sound that US bands (and British bands) have largely abandoned, unfortunately, because Until The Sadness Is Gone is a great listen, from start to finish. There is a lot to fall in love with - balladry that isn't cloying, spirit that isn't draining, and sweet melody that doesn't make your teeth ache. This is a new band, whose debut in 2006 signalled intent - they have already jetted straight to the top of the game.