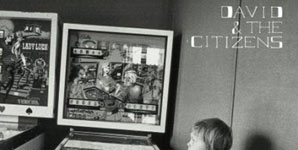 Swedish band David & the Citizens signed with the Bad Taste label to release their third full-length album, and have undergone an important shift in their sound.

Where earlier albums like Until the Sadness Is Gone used the contemporary Swedish indie pop sound (upbeat, melodic, perfect English) and refined it beautifully via classy singer-songwriter material, there's a dark, moody edge to Stop the Tape Stop the Tape, sounding more like Fountains of Wayne on a darkly cynical day, or Clem Snide rocked up. The same tightly wound sound is maintained, but there is a lot more overdriven electricity here - rock guitar and rock structures.

The combination of rock and pure pop melodic sense is more deeply rewarding than the band has been before (and that was always pretty satisfying) - Stop The Tape Stop The Tape is an album that can be consumed time after time with no sugar rush.