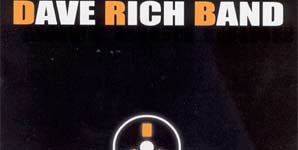 Overload is the debut album to come from the Dave Rich Band. This five-piece band from Tavistock in Devon of all places!!!

These guys kick straight into action with the title track to the album 'Overload' that has the bloke listening in the same office as me saying, "Is this Paul Weller?" Now although he was totally wrong about who it was, this has to be recognised as a compliment to the band. As for me I do hear in some places the similarities with Weller, but to me it is without the energy that Weller possesses. This is not a negative at all for the band; it is just their style. 'We're Done' does bring the album up a tad with Dave Rich carrying on singing at ease where it seems he is not even trying, it's just that easy, and yet the tempo has been upped by a considerable amount. This is a rip-roaring track of harsh lyrics that can only come from the pit of the stomach. 'On The Balcony' surprises me as a Pop style song, which with Dave Rich's voice I was sure was not at all possible, this is a really good upbeat track and I just did not think something like this was possible. I think that this is deliberate as 'Fish Fin Walking' follows this track, which is a dark and somewhat disturbing track lyrically. 'Time With You' is a fitting way to finish the album off with upbeat but not load chords being played, alongside the rough vocals.

The thing about this album is that it holds everything; it has that Weller feel, a bit of pop, a hint of rock and cold dark lyrics (or real life lyrics, depends which way you look at it). All in all though for the majority of people out there they will like parts and dislikes other bits. I can't see people liking the whole album, but that is just down to the wide range that the album has visits.