Daughters come from the same zany time in hardcore that gave us the likes of The Blood Brothers and The Locust, gloriously bizarre bands that were just as loony as they were battering. However, whilst most of the bands from this chapter have since disbanded (admittedly Daughters did themselves for a time), Daughters in the current climate are stronger than ever following last year's You Won't Get What You Want. This record saw Daughters take their initial rampaging, incomprehensible mathcore-ed up surf riffs and cowboy-like snarl from vocalist Alexis Marshall and turn it into something more twisted, haunting and unhinged than anything the band had previously attempted. 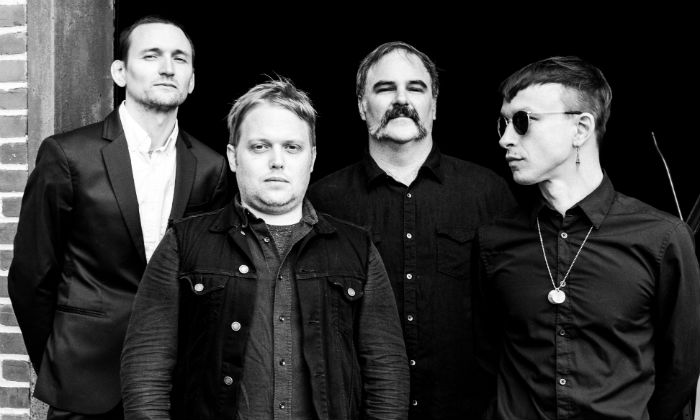 Whether it was bringing in elements of post-punk and industrial or a deep dive into themes of depravity and obsession, the Rhode Island noiseniks delivered quite the masterful odyssey into the darkest parts of the human soul. Tonight, they bring their findings to Leeds' Brudenell Social Club for a psychotic affair.

First up though, kicking off tonight's proceedings is Jessica93, who has an interesting sound and approach to music. The French one-person drone act takes to the stage and loops their various guitar and bass parts, gradually building until there's a complete song they can play over and over. The vibe was often heavy, yet had something soothing to it, the thick, crushing textures washing over you.

Daughters' set can be described as cult-like and Satanic, but what shouldn't be undermined is how rock 'n' roll they are. Opening with The Reason They Hate Me, with its piercing, angular stabs and overall horror-movie-like tone, the crowd are instantly swept into a merciless warzone of charging bodies. But there's something more to this show than just a mosh-fest. On You Won't Get What You Want, there is a sense of humanity being put to one side and its spell doesn't let go of the crowd throughout the night as they're taken over by their most primal instincts.

Long Road, No Turns likewise feels like a hurricane, the way shrill, unrelenting dead chords match pendulum-like buzzing and in the middle is Marshall wailing about how 'a little is all it takes.' All these elements run dizzying circles around you and it ignites some purely human, messy slamming tonight. It's Guest House though where the chaos really peaks thanks to its drilling high-pitched guitar stabs and the 'let me in. LET ME IN!!!' refrain; cathartic for the crowd clambering around Marshall to yell with him. It's a beautiful thing to experience, so many people getting a release out of the ugliest of emotions.

If there's one song that favours the nuanced aspect of Daughters' darkness, it's Less Sex. With its western breeze and seductive, throbbing pulsations, it's a much-needed breather for tonight. Whilst people proceed to jump and head-bang to the louder dynamics of this song, for the most part its standoffish pace and themes of obsession pick up the crowd from their battered shells and place them in a cultish trance, with many of the crowd lulling and swaying to the track's gloom.

The band themselves can't escape their own curse either as they spend the show furiously headbanging and punching out every note. Marshall and guitarist Nicolas Andrew Sadler in particular are thrilling sights to see. Sadler has such a one-of-a-kind style; utilizing high-notes and unrelenting tremolo-picking as opposed to low, burly riffs as is normally the case with metal guitarists. The rhythm section, of course, supply the muscle with concrete-to-the-face bass and cascading drums. Sadler really stands out though, making lightning-fast, topsy-turvy motions on his fretboard that are virtually impossible to follow.

It feels like a disservice to Daughters' ominous power to say Marshall is entertaining as he's performing such torturous music, but even as the apocalypse is taking place, it's hard not to be wowed by him effortlessly slithering over the crowd, kneeling on top of hands and climbing Brudenell's seats and columns. Towards the end he's shirtless, taking off his belt and standing tall, wiping off the sweat as chaos ensues all around him; truly balancing the action and horror Daughters have been bleeding out through the night.

It wouldn't be the craziest thing to say this is rock 'n' roll's final form. If you think about it and the origins of the genre, the way there was always a side perceiving it as 'the devil's music' and a side that just has a blast with it, what goes down at a Daughters show is the highest order of both sides. There's a very strong argument to be made that this could be the work of Satan and even in the more surf-riffs-gone-brutal of older material played tonight, this feels like the logical conclusion of what our great-grandparents warned us about when Elvis hit the scene. It's really down to you if you want to run away from it or thrive in the dark side.