'Short Stories', Daniel Grinberg's freshman release, dropped on October 29, and it's a scintillating representation of modern Indie-Pop. Grinberg deftly mixes charming vocals, guitars that emanate a 60s pop influence and power-pop melodies into a delightful, coherent, uniform sound that peeks around the corner of alternative rock. 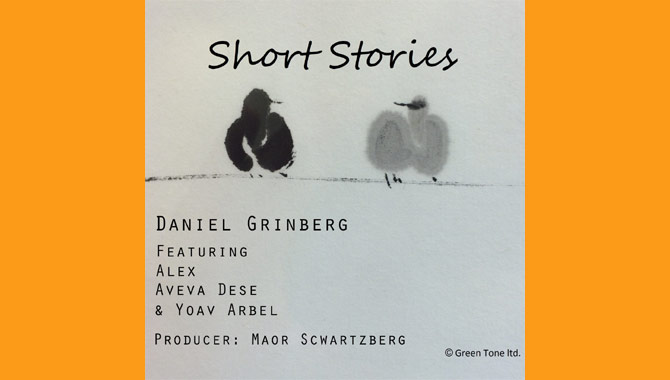 Grinberg was born in Bueno Aires; later his family moved to Israel, where he became enthralled with music. After studying at Tel Aviv's music academy for five years, he supported himself by working in recording studios and moonlighting as a writer of television music. Then he sidetracked into the world of hi-tech, where he spent the next three decades. Fortunately, he's now returned to his musical roots. 'Short Stories' contains twelve tracks and there isn't a dog among them. Many of the songs on the album are perfectly tailored for Hollywood soundtracks, the kind of romantic movies in which boy-meets-girl, a la the Twilight series of movies.

The first track, '80 Years', starts off with an acoustic guitar and a female voice vaguely reminiscent of Christina Perri. An indie-pop tune, the song exhibits a country-western flavor that works well. And the melody is soft yet pleasant. Next up is 'Rivers', an upbeat indie-pop tune featuring 60s pop guitar riffs. The only downside to the song is the vocals, which are too subdued.

'Hey You' is a gem of a song; a slow indie-pop tune that borders on balladic. The first half of the song is lethargic, but then the melody and the vocals ramp up and the song takes off. The other gem on the album is 'Beyond', a guitar driven number with excellent vocals. The song, like many of Grinberg's compositions, builds slowly, becoming more and more attractive as it develops. 'White Fields' follows the same gradual, melodic development. 'The Forest' features a male vocalist with a touch too much reverberation. Still, the melody is grand, reflecting a Chris Isaak's sensibility that really hits home. If the vocals were cleaner, 'The Forest' might have been the best tune on the album. The range of Grinberg's talent is evidenced on 'Michaela', which begins with keyboards and a female vocalist. As the song builds, it encompasses a noir susceptibility that adds an unexpected dimension.

The last track on the album, 'You Give Me', takes a simple melody, enhances it and transforms simple into complex and wonderful. It should be noted that without the tremendous vocal talents of Alex, 'You Give Me' and many of the songs on 'Short Stories' wouldn't be nearly as excellent as they are. 'Short Stories' is a superb first effort, one that any musician should be proud of. Rumor has it that Grinberg is already at work on his sophomore album. Indie-Pop lovers can only hope it rivals 'Short Stories'.