Review of Club Meds Album by Dan Mangan And Blacksmith

Dan Mangan's fourth album seems to mark a new chapter in his career. It's the first time he's formalised his backing band under the moniker Blacksmith, and by doing so he's broadened his sound to include loops, feedback and drum machines. While 2011's 'Oh Fortune' garnered much praise, especially in his native Canada and remains Mangan's high watermark, 'Club Meds' is a very different proposition. It's a mix of dark and ambitious meditations, which weave together to create a difficult but rewarding record. 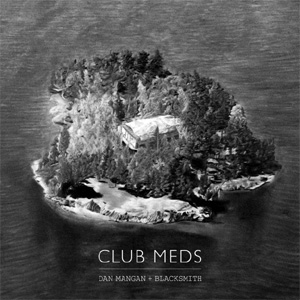 In the liner notes, the 31-year-old talks about sedation. It's a Prozac Nation, kind of approach. 'Club Meds' is his wry commentary on a generation that's under the influence of an increasing popularity to medicate to deal with the modern world around us. As such, there's a distinct pharmaceutical haze to many of the songs with Mangan's vocals taking on a stream of consciousness approach during this 45-minute dissection of 21st century society.

In a similar way to Radiohead's move to re-invent their sound by introducing electronics, Mangan's approach here feels less commercially viable and more of an artistic statement. That's not a bad thing, however while challenging listeners, he's also masked some of the humour and lightness of touch that elevated his last two albums. There's a creeping sense of self-importance that's difficult to shake here. While what he's saying is perfectly valid, 'Club Meds' is a somewhat subdued and sombre affair, instantly making it less appealing, but more rewarding than its predecessors.

'XVI' crystallises Mangan's sentiment with the line: "We're dying of boredom, there's nothing to do. See if you hate the man, the man hates you too". It's an example of the depth he possesses as a lyricist and songwriter. Once you dig beneath the electronic flourishes of these songs, the familiar accomplished guitar and brass melodies are still to be found, they're just less immediate than on previous efforts. Perhaps unsurprisingly, Mangan's voice suffers under the weight of everything going on here. He's got a strong and distinctive vocal delivery, but at times it gets a little lost amidst the tide of instruments and effects deployed. Again it's only when you've delved a little deeper that you fully appreciate his performance and turn of phrase.

There is much to explore on 'Club Meds', and while it tends to be approached with a heavy social conscience, much of the material is ultimately rewarding. The immediacy that Mangan has demonstrated in the past may be absent for long stretches of the record, but that doesn't mean he's lost his way. Mangan's taken a more serious approach to the subject matter he's writing about, and by doing so he's exploring new possibilities. He's certainly not got the formula, which made 'Oh Fortune' shine, quite right here as his band take a more prominent role, but it's far from a disappointment.