Creamfields 2006, Review, Bigger and Better Than Ever!

Creamfields 2006 - Review - Bigger and Better Than Ever!

Creamfields 2006 - Bigger and Better Than Ever! Multi-award winning dance festival Creamfields celebrated its 9th fantastic year on August the 26th at a new location in the Cheshire countryside due to the previous site, in Liverpool, being scheduled for redevelopment. 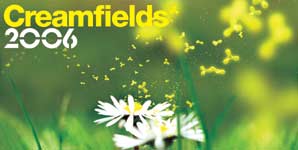 This change of venue did not, however, result in any drop in the standards expected by the 40,000 plus revellers who regularly make this the most awaited dance event of the summer festival season.

With the main live stage being headlined by the Prodigy and arenas hosted by legendary DJ's including: Tiesto, Paul Oakenfold, David Guetta, Erik Morillo, Timo Maas, Roger Sanchez, Rob Tissera, Tidy Boys, Graeme Park, Ferry Corsten and a host of others this year's event was always going to be special, but special hardly describes the level of artistry, energy, dedication and mastery displayed by everyone who appeared and gave their all!

In the main Cream & Goodgreef arena the highlight for me was a 90 minute set by DJ Tiesto..

Born Tijs Verwest in Breda, Holland, in 1969 Tiesto started his rise to fame by playing at a local club called The Spock. He was soon signed by Rotterdam based label Basic Beat Recordings for whom he did 5 mix CDs as part of their Forbidden Paradise series before starting Black Hole Recordings with close friend Arny Bink.

His debut album "In My Memory" was Holland's best selling dance album of 2002 and only the first of many highs: he was DJ Magazine's Number 1 DJ in the World for 3 years running (2002-2004) the first DJ ever to hold a concert in a stadium (25,000 seater and a sell out!) and the only DJ, so far, to be invited to host the Olympic Games opening ceremony (Athens 2004) playing to an estimated audience of 3.8 billion!

Teisto's association with Cream began in 2002 when he was given a residency at Amnesia, in Ibiza, alongside Paul Van Dyke, who also appeared at Creamfields this year and played a blinding set between Ferry Corsten and Eddie Halliwell.

His set was nothing less than inspired featuring, as it did, most of this year's hottest dance tracks as well as some of his own including his new single `Dance4Life' a special anthem for the Dance4Life charity organisation which he premiered during the 16th edition of the International Aids Conference in Toronto.

For this special project, from which all revenues go to Dance4Life, Tiësto collaborated with Maxi Jazz, the lead singer from Faithless. About this project Tiesto said: `The way Dance4Life engages young people around the world to do something about the HIV/AIDS problem is very powerful. They offer young people an attractive way to make a contribution and reward them with a spectacular event. The combination of serious content and entertainment assures that Dance4Life gets young people on the move.' With his magical combination of innovation, inspiration and sheer technical skill it's easy to see how Tiesto has become the legend he is.

Other highlights of the night included Graeme Park in the VIP/Hospitality area who is as good, if not better, now as he was back in the old Hacienda days and K Klass who closed the night down in there leaving the crowd gagging for more.

Rob Tissera, Kutski and Amber D were the stars of the Tidy tent.. You could tell by the queues waiting to force their way in that something special was going on. This arena could do with being bigger next year. In the Chibuku arena Tiga and Felix da housecat were just brilliant. Felix in particular kept pulling top tune after after top tune out of the bag and creating some unbelievable mixes. Why this guy doesn't get bigger billing is a mystery to me.

The headline act on the main live stage was Prodigy.. Most of their hits got an airing and they were simply peerless. Surely this must be one of the most exciting live acts in the world and if the reaction of the crowd was anything to go by then they're certainly going to be around for a long time to come.

Having attended last year's Creamfields I was doubtful that the organisers would be able to match it this year. I needn't have worried though because it was simply the best night of music and dance I've experienced for many years. The layout, facilities, crowd and acts were all spot on, though the main stage might have benefited from being at the bottom of a slope rather than at the top as getting a decent view was almost impossible.

A major plus was the Hospitality Area. With its carpets, potted plants, leather sofas, proper toilets and bars selling a full range of drinks it was worth every extra pound the tickets cost. it had an intimacy you can't normally get at such a large event and the choice of DJs to entertain the crowd was inspired. It was an oasis amongst all the mayhem and I would recommend you to take the VIP option next year.

Finally a couple of special mentions.. Vladimir Petrovich flew in especially for the night from Moscow specifically to see Tiesto and James Dutton was dropping some great tunes in the press area where, sadly, not enough people were able to see just how good this young lad is; definitely a name to look out for in the future.