Review of Ghosts and Heights Album by Crash My Model Car 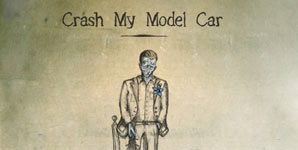 Crash My Model Car are a four-piece band from Glasgow, although lead singer Iain Morrison hails from the Isle of Lewis, an island off the north west coast of Scotland. And Ghosts and Heights is one of the best albums to come from that great city in a long while. Nothing massively original, just great music, with a Lemonheads/ Counting Crows/ Snow Patrol feel - which obviously suits an indie show like The OC just fine: they featured a song from CMMC in the show in 2006.

If the idea of a Snow Patrol with teeth appeals, Ghost and Heights is your disc - quiet when it needs to be, and nicely grungily aggressive when it can be, this makes Eyes Open sound rather aimless. Songs like West Coast Train and Maybe are simply superb. It's often the case that a band's debut album is full of the songs it has taken an age to write, refined in the live set - CMMC have a great reputation from their gigs in and around Glasgow. And that is the way that Ghosts and Heights sounds - there is not a weak moment on the whole disc, and repeated plays only burn it in deeper. A genuinely rewarding find. Album of the week.