What better way can there be to spend a Saturday night in Glasgow than in the company of 10,000 dedicated clubbers and music lovers at Scotland's premiere dance event? 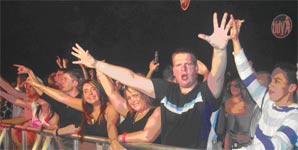 With six arenas and around sixty DJ's and MC's this was, without doubt, the place to be for anyone who is serious about dance music.

And what a selection they had to choose from..


Dave Pearce and Kutski, in particular were excellent (Kutski also played a set earlier in the main arena). They both just get better and better every time I hear them play.

Dave Pearce is, quite rightly, one of the county's top DJ's and a guaranteed crowd pleaser.

Anyone who knows anything about the genesis and evolution of dance music in the UK will know how influential Dave was in the early days in bringing hip hop to the UK and making Radio 1 play it.

In the main arena the highlights for me were Kutski, Simon Foy and Marco V.

Kutski is still in his 20's and already has a great career.

He currently riding high with his own show on Radio 1 as well as being in demand all over the world. He has only recently returned from his first tour of Australia having already played on 3 other continents.

What you get with Kutski is turntablism at its height.

His scratching, beat mixing and cutting are the result of many thousands of hours of intense practice since the age of 14 and a testament to his dedication.

I was privileged to attend his DJ master-class at TW11 (shame more wannabe DJ's there that weekend didn't also attend) and was amazed at the guy's technical ability and instinct.

In any of his sets you're likely to hear a skilful selection of tracks ranging from hardcore to hard house, hardstyle to hip hop, and even chart classics thrown in where he thinks they will work, and he is never wrong.

Kutski operates the turntables like a master alchemist adding exactly the right amount of this chemical, and that compound, until the mix is just perfect.

He is currently working on an Underground Hardcore triple CD with Billy Bunter and Slipmatt featuring exclusive remixes and original tracks which should be in the shops in a couple of months. Well worth looking out for.


Simon Foy had played the night before at a new club in Glasgow called The Clinic and blew the place apart. His set here was even better.

Marco V had his set broadcast live on Radio 1 in the 'Essential Mix' slot and was amazing.. as you'd expect from someone of his calibre and Judge Jules does what he does best.. He can always be relied on. I still say one of the best sets I've ever heard was the one he finished Globalgathering with about 4 years ago.

Upstairs in the Hed Kandi area there were some excellent funky tunes being played.

These guys really know their stuff and it's not surprising they are one of the world's leading club brands. Their regular releases are always best sellers and their latest release 'Disco Kandi, The Mix' (Hedkandi67) is no exception.

With tracks old and new from Alex Gaudino, Straw Dogz, Bootly Luv, Dave Spoon, Housemates, Martin Solveig the Hoxton Whores and many others, this 3 CD set is a treat and a 'must have' in any clubbers collection this summer.

Sadly I didn't get to spend much time in the Type 2 Arena, but people I spoke to told me that Azwell and Danny Howells were particularly good.
I did spend a fair amount of time in the Back to the future and Tidy arenas though and was blown away by the standard of the music and the sheer enthusiasm of the crowds in there. Obsession and Scott Brown were their usual brilliant selves and there was some fine mc-ing from MC Korrupt and MC Voyager amongst others.

In the Tidy tent the line-up was second to none. The Colonel . Jason Cortez, Guyver, Mark Sherry, Tidy Boys, Alex Kidd, Rob Tissera, Andy Whitby and Lisa Pin-Up is about as good as it gets. The room was absolutely packed and, at times, impossible to get into. The heat was intense, but so was the music and the punters were well up for it.

For me the highlight of the night was Alex Kidd.

I've seen Alex play many times now and he just gets better and better. There is an elite handful of DJs who you just know are giving you 110% and Alex is one of them.

If you'd seen him laid out on the floor after his set, absolutely drained, you'd understand what I mean.

He has had a very busy few months with gigs all over the UK as well as Finland, Australia, Canada, South Africa and Europe. He will be found banging it out in Ibiza this summer as part of the Tidy presence there.

A new CD release of Massive Hard Trance Anthems is due out soon and should be well worth adding to your collection.

Watch out for public announcements of a festival Alex is organizing in the north-east in August.

This will be called Kiddstock and will be held on a farm in the Middlesborough -Newcastle area. There will be a main tent where you'll find the cream of the hard dance world doing their stuff, a stage in the barn for new and up and coming DJ's and an outdoor arena sponsored by leading club wear designers 'Contagious'.

The ethos behind this event is to break the mould as far as festivals go.

We've all paid £50+ to attend events where we only really wanted to see a small part of what was on offer.. This event will be specifically for hard dance fans and this will be reflected in the price of the tickets, which could be as little as £10.

I must say it really is about time something like this happened and top marks to Alex. I wish him every success with what I hope will become a regular event.
This was my first Coloursfest event and I have to say I was very impressed with it.

The planning and organizing were spot on; the stewards and security staff unobtrusive, but effective; the music and selection of DJ's fabulous and the atmosphere second to none.

I can't wait til next year.